In the hit 1970s sitcom All in the Family, Rob Reiner played Michael Stivic, whose progressive countercultural 1960s sensibilities made him a perfect foil for his bigoted, conservative father-in-law Archie Bunker’s struggles to adapt to a rapidly changing world.

Now a celebrated advocate of the Democratic party, Reiner’s great artistic achievement in 2017 was collaborating with neoconservatives and intelligence community insiders to produce a jarring propaganda video featuring Morgan Freeman warning that “we are at war” with Russia. So far his masterpiece of 2018 is a tweet declaring that if you “libel” Russophobic eugenicist James Clapper and CIA torture facilitator-turned-MSNBC pundit John Brennan you are libeling America.

Did you hear Jim Carrey has condemned Facebook and severed all ties with it?

“Ahh, good!” you may be thinking. “It’s about time a high-profile celebrity spoke up about Facebook’s oppressive political censorship! Leave it up to the true artists to stick it to the man when our society needs it most!”

It is perfectly understandable that you might think that. Carrey, who played a screenwriter fighting McCarthyism in 2001’s The Majestic, is a world-renowned comedian who has been famously pursuing spiritual enlightenment and plunging himself into the task of mastering the art of painting for many years. He’s just the sort of person you’d think might bring some light into a deeply endarkened aspect of western consciousness.

“I’m dumping my @facebook stock and deleting my page because @facebook profited from Russian interference in our elections and they’re still not doing enough to stop it. I encourage all other investors who care about our future to do the same. #unfriendfacebook,” Carrey tweeted today. 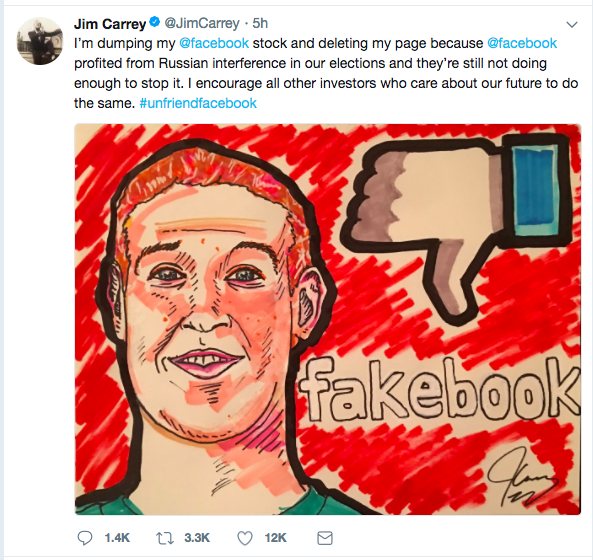 Look at the worldview of the average person who identifies as a liberal and you’ll find adoration of psychopathic authoritarian intelligence agencies like the CIA and the FBI, a significantly warmed opinion of George W Bush and the neocons he ushered into power, a total apathy toward the US war machine and Orwellian surveillance network, a seething hatred of all things Russia and a hysterical McCarthyite beef with anyone who fails to fall in line with approved establishment narratives. They have become the very flag-waving, authority-cheerleading, art-killing oppressive zealots that the counterculture of the 1960s burst free from like a drowning man finally getting his head above water and clawing his way onto the shore.

I’ve been thinking about the western attitude toward Muslims a lot lately, and how we’re all having the exact wrong debate about it. The modern liberal loves to scream at conservatives for Islamophobia, as though screaming at someone not to be afraid of something has ever been useful. It makes them feel very good about themselves to do this, to scream at the “racists” and “hateful bigots” who fear violence and extremism from Muslim radicals. They will scream at conservatives over this til they’re blue in the face… but you’ll never see them screaming at the US war machine that is ultimately responsible for Islamophobia in the first place.

Endless war in Muslim-majority countries necessitates war propaganda, which will necessarily paint Muslim people as the enemy, which necessarily increases fear of Muslims. More importantly, a causal relationship has been clearly shown between so-called Islamic terrorism and western military interventionism, and a growing body of research indicates that the predominant motivating force driving people to join violent jihadist factions is seeing friends and family killed and arrested by armed forces outside their control.

Ask a liberal to fight this factory of terror by fighting for an end to US military interventionism and they’ll just stare at you like a deer in the headlights. They’d rather scream at the guy in the MAGA hat.

It’s like that all across the board. The modern liberal will squeeze every last vote out of racial identity politics that they possibly can, but try getting them to sign on to the notion of taking some actual money away from the plutocrats and the war machine and putting it toward slavery reparations and see how fast they slam the door in your face. They’ll cheer for Middle Eastern immigrants but ignore the western interventionism which creates them. They’ll allow any manner of encroachment on personal sovereignty in the form of Orwellian surveillance, increasingly militarized police forces and an increasingly corporatized prison system without so much as blinking, but don’t you dare use trans-exclusionary language when talking about gender dynamics because that would make you a Nazi.

People are driven to embrace progressive value systems by that sacred spark which lives in all of us which knows that it is natural for us all to get along and help each other out, but people in power figured out how to manipulate that impulse in a way that has turned its once bright-eyed idealists into a bunch of stuffy, artless church ladies who’d be right at home in J Edgar Hoover’s America. That spark burst out of the oppressive McCarthyite gray world of the 1950s into the cultural revolution of the 1960s with a gasp of relief, and to this day it still has the potential to save us all, but instead it’s been strapped down to a steel table and hooked up with wires by the propagandists and manipulators of the US-centralized power establishment.

The progressive drive toward real change has been warped and twisted into a drive toward good manners. The push toward solving problems by equitable distribution of money and power has been neutered by the fairy tale that you can solve problems with a “Resist” hashtag and a rainbow flag. Rob Reiner has become a weird mutant Archie Bunker, an Archie Bunker who still has all his old, obsolete, establishment-friendly ideologies in place, but knows never to assume someone’s gender.

Wake up, little spark. I know you’re still in there.

The Empire’s Horrifying Plot To Franchise The White Helmets Worldwide

I assume from your silence, @martinbright, that you are unable to substantiate the allegations you have made against me. Some more facts for you. @ClarkeMicah @Tim_Hayward_ @RuthSmeeth https://twitter.com/PiersRobinson1/status/1421337784749641729

@ClarkeMicah @martinbright @martinbright you have now accused me of ideological bias, being a putin/Assad apologist and of disinformation. All false, all defamatory. My only biases are toward objective research and truth and the maintenance of international law and norms. 1/2

The imperialist clowns behind that Epoch Times propaganda rag you see right wingers spamming around everywhere.

Falun Gong clowns in Taipei. My favorite thing about this picture is how they're not even hiding the fact that they serve US imperialism. Also note the Gucci cap

Did y'all know there's a @caitoz YouTube channel where someone reads her articles? It's been great for when I'm doing yard work.

So Much Of What The CIA Used To Do Covertly...

Who Wants To Hear My Crazy, Kooky Conspiracy Theory About...

The CIA Used To Infiltrate The Media. Now The CIA...