As things get even uglier in Syria I’m seeing some Trump supporters struggling to justify or dismiss the completely indefensible acts of human butchery that this administration has been inflicting upon that country. They’re arguments I’ve seen recycled in the MAGA crowd every time news breaks about the president once again continuing the reprehensible neoconservative policies of his predecessors and doing the exact opposite of what he pledged to do on the campaign trail, and I thought I’d like to address a few of them here.

I’m going to address a few arguments I see a lot which are just plain stupid, from a nonpartisan, non-ideological perspective. Depending on your personal opinions about immigration, fiscal policy and so on you’ll certainly have plenty of reasons to argue for or against the current administration; I’m not interested in addressing those here. I just want to focus on the few stupid, annoying arguments I keep seeing made in defense of the sitting president that are based entirely on bad logic and poor understanding, which stagnate real debate about real concerns. Here are three of them:

I happen to agree that Hillary Clinton would have been worse in some very important ways. Her campaign pledge to install a no-fly zone in an area where Russian military planes are conducting operations was horrifying and disqualifying, and she would have put less inertia on the war machine in a few key areas. Nevertheless, pointing this out is never, ever a legitimate defense of the things that Trump is doing.

Okay, sure, Hillary would have been worse. So what? How is that a legitimate response to someone condemning this administration’s nuclear escalations with Russia, keeping thousands of troops in Syria with the goal of effecting regime change, approving arms sales to Ukraine, working to shut down WikiLeaks and arrest Julian Assange, perpetuation of the Orwellian surveillance state, keeping troops in Afghanistan, escalating tensions with Iran and North Korea, etc? All you’re doing is disingenuously trying to take the target of criticism off the sitting president’s head and drag the conversation kicking and screaming into a moronic partisan debate about who would have been worse. You’re killing legitimate debate with an irrelevant red herring.

Responding to criticisms of this administration’s depravity with “yeah but Hillary” is like a lawyer trying to defend an accused murderer by pointing out that Jeffrey Dahmer did way worse. It’s stupid. It’s annoying. Stop doing it.

We’ve talked about this before. The above video depicts Cenk Uyger on MSNBC alongside Glenn Greenwald in 2010 ranting about the way Obama supporters were defending their president in exactly the same way the MAGA crowd defends Trump today.

“Because you remember what they told us: Obama’s a genius! I couldn’t possibly understand his genius — he’s playing three-dimensional chess!” Uyger exclaims in the eight year-old clip. “Well what part of three-dimensional chess do you give away your queen, your knight, your bishop, and the House of Representatives? No! They were wrong, we were right. It’s time to fight.”

Yes, it is time to fight. It’s time to stop defending your president’s nonstop capitulations to the swamp as some great feat of strategic wizardry.

There is a powerful unelected second government that is controlling the behavior of your elected officials, and by dismissing it as brilliant strategic maneuvering you are actively shoving that urgent problem out of the spotlight. It’s stupid. It’s annoying. Stop it. 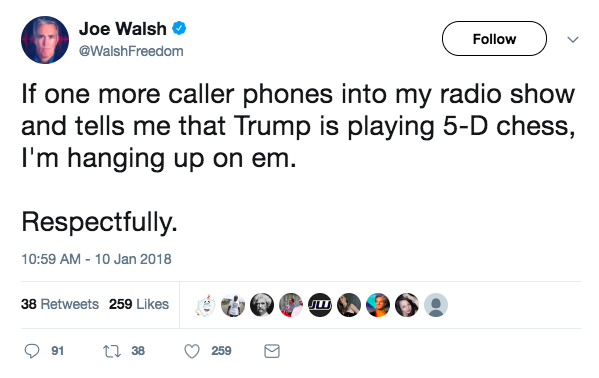 3. “Trump is fighting the Deep State!”

No, he is not. Trump isn’t fighting the deep state, he’s collaborating with it. He’s continued and expanded the same warmongering Orwellian policies as Bush and Obama, and he’s playing right along with the deep state’s new cold war escalations as well.

Trump isn’t fighting the deep state, and the deep state isn’t fighting him. There is no “coup”. Everything has completely changed since certain factions within the FBI and CIA had agendas against him prior to his taking office. The leaks from inside the intelligence community during his transition and the early days of his administration have completely stopped. For many many months now whenever you hear about a new leak it’s coming from congress, from inside the administration, or from people who interacted with his campaign. 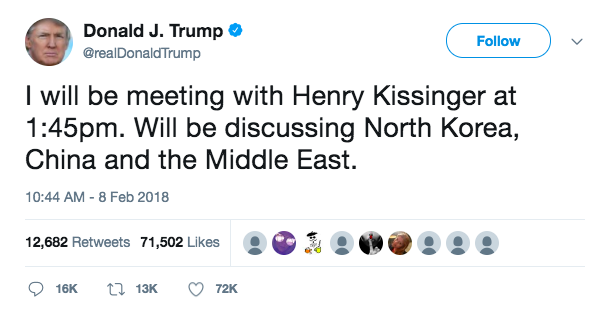 The only people fighting Trump at this point are Democrats and Never-Trumpers, and that’s not what the deep state is. The deep state is the unelected power establishment consisting of a loose and often conflicting collaboration between plutocrats (including war profiteers), intelligence and defense agencies, and the corporate media which serves as their propaganda wing. It is completely nonpartisan and uses America’s elected government in whatever way will best advance its many agendas. The Democrats and John McCain types working to weaken Trump isn’t a deep state agenda, it’s normal politics.

This is a crucial distinction. Russiagate was constructed by the US intelligence community and pointed at Trump in 2016, but now that he’s demonstrated he’ll be a good little boy and play along with pretty much every one of their agendas they haven’t been targeting him. They don’t need to. They never cared about impeaching Trump, they cared about getting their new cold war and crippling the Russia-China tandem. Since they don’t have to get the sitting president impeached to accomplish that (a very risky move anyway), they’re content to work with him until the next presidential puppet rolls into office. It’s the Democrats and their allies who are fueling the Trump-Russia collusion narrative at this point, not the deep state.

If you want to support Trump, that’s fine, but don’t piss on my leg and tell me it’s raining. Don’t tell me you support this president because he’s working to overthrow the unelected power establishment which uses the US government as a weapon to advance its agendas. That argument is contradicted by the raw facts of everything that has happened in the last year. It’s stupid. It’s annoying. Stop it.

On The Syria Occupation And The New Face Of Imperialism

How The Establishment Propaganda Machine Gaslights Us Into Submission

“As long as humanity is enslaved to the ego it will remain enslaved to abusive power structures, because manipulators will always be able to use our egoic hooks to propagandize us into supporting their interests at mass scale.” https://caitlinjohnstone.substack.com/p/we-wont-be-free-until-our-minds-are

I have to admit, I stopped reading @caitoz pieces when I discovered she includes a link to her husband reading them - now I listen to them. I find his voice pleasant with a hint of Jello Biafra. Anyway, this one is particularly recommended. https://twitter.com/caitoz/status/1440499163842547715

Actually, That Was America: Notes From The Edge Of The...

The Fact That Americans Think Biden Has Changed Things Shows...

Biden Will Escalate Aggressions Against China While Republicans Call Him...