A BBC interview is making the rounds today among opponents of western interventionism in Syria. The subject of the interview, Admiral Alan West, voiced some much needed skepticism about the establishment narrative around the alleged gas attack in Douma. Everybody’s talking about it because West is an empire loyalist that nobody in their right mind would accuse of being an “Assad apologist” or “useful idiot of the Kremlin”, as anyone else who doesn’t swallow the official story hook, line and sinker is uniformly labeled.

West made some sensible comments about the White Helmets and the fact that Jaysh al-Islam had far more incentive to stage such an attack than Assad had to perpetrate it. Even more helpful was his personal account of having been aggressively pressured to make false reports about the success of the British bombing campaign in Bosnia, suggesting that those pressures can lead to bad intelligence and erroneous military responses.

“I just wonder, you know we’ve had some bad experiences on intelligence,” West said. “When I was chief of defense intelligence, I had huge pressure put on me politically to try and say that our bombing campaign in Bosnia was achieving all sorts of things which it wasn’t. I was put under huge pressure, so I know the things that can happen with intelligence.”

So that’s a very significant addition to the dialogue. For me, though, the most interesting comments made in that interview came not from West, but from the BBC reporter who was interviewing him.

In the latter half of the interview, BBC’s Annita McVeigh asked the following questions after West’s comment about Bosnia:

“We know that the Russian Foreign Minister Sergei Lavrov said on Friday, or accused a western state on Friday, of perhaps fabricating evidence in Douma or somehow being involved in what happened in Douma. Given that we’re in an information war with Russia on so many fronts, do you think perhaps it’s inadvisable to be stating this so publicly given your position and your profile? Isn’t there a danger that you’re muddying the waters?”

Wait a minute, did that just happen? Did a BBC reporter just suggest that it could possibly be “inadvisable” for a retired naval officer to make public statements questioning what we’re being told to believe about Syria? That the conversation shouldn’t even be had? That the questions shouldn’t even be asked? Because we’re trying to win an “information war”? Did McVeigh really suggest that the intelligence of the same war machine which led us into Iraq on false pretenses should not be questioned at the risk of “muddying the waters”?

West was introduced as someone who was skeptical of the official Douma narrative, so he didn’t spring this stuff on McVeigh out of the blue and her questions could easily have been prepared in advance. I am genuinely curious if she came up with this bizarre line of inquiry on her own or was given it by a superior. Attempts to contact McVeigh via email and Twitter have thus far gone unanswered; I’ll update this if she responds. 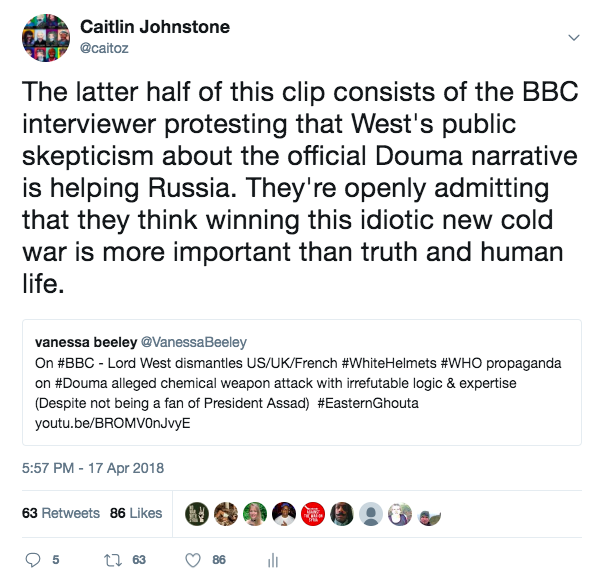 You know you’re in trouble when the military man tries to do the journalist’s job by asking questions and holding power to account… and the journalist tries to stop him.

By suggesting that winning an “information war” with Russia should take priority over critical thinking and truth telling, McVeigh essentially admitted that she is a propagandist for the western war engine. Her comments say a lot about how she sees her role at the BBC, and it’s likely that this is a culture that is being fostered within the entire outlet as well.

This is very concerning. Anyone who’s studied the situation in Syria understands that western military involvement always comes with a risk of confrontation with not just the armed forces of the Syrian government, but with those of Russia and Iran as well. All that it would take right now is a miscommunication or a weapon discharging in an unintended way to set off a swift chain of events that could lead to all out hot war, which when Russia is involved always comes with the possibility of a nuclear warhead being deployed by either side in the chaos and setting Mutually Assured Destruction into effect.

These are not at all outlandish possibilities to consider; they are breathing down our necks as you read this. And yet in this hotly volatile climate, people are being dissuaded from asking questions.

We as individuals are all vastly smarter and wiser than the oligarchs who rule us, and we can handle picking our way through a wide array of information, even information which runs counter to western interests in an “information war”. Ideas are not inherently dangerous. What is dangerous is truth being hidden from the public, making us incapable of making accurate determinations about what’s true and what’s false and using that knowledge to make our wishes known to power. What is dangerous is escalations with a nuclear superpower and its allies and a steadily increasing hostility toward skepticism and detente advocacy.

It isn’t their place to protect us from ideas and information. It isn’t their place to use us as pawns in their idiotic “information war”. They need to stop concerning themselves with controlling the way we think. We are not children that they get to lie to because they believe it is in our best interest. The state of the world today shows that the people running our media and our governments are the very last people on earth who should be making such calls on our behalf.

UPDATE: I had a brief and unsatisfactory interaction with McVeigh on Twitter shortly after this article was published. I don’t feel like any relevant questions were answered; what a BBC reporter is doing arguing for an “information war” against Russia, to what extent this concept of information war impacts her work, if other BBC staff saw themselves as fighting an information war against Russia, if she was asked to conduct that line of inquiry with West by a superior at the BBC, etc.

Lord West told me he had no specific evidence about the Douma attack but from strategic point of view, it didn’t ‘fit well’ that Assad would have ordered it. We were very interested in his opinion, otherwise we wouldn’t have asked him to do the interview. ….. https://t.co/MctkGGQoD2

2/2…. It was right that he got to give his opinion, and right in the context of the information war to question him about any evidence. https://t.co/MctkGGQoD2

"He gains credibility by appearing to fight the power, then uses that stolen credibility to help manufacture consent for the most high-priority agendas of the powerful."
https://soundcloud.com/going_rogue/tucker-carlson-is-as-much-a-propagandist-as-anyone-else-in-media

Western propaganda on the Russian invasion of Ukraine has been unlike anything I've seen. Not even 2002/3 compares. The EU pressure on all platforms to ban all Russian voices is greater, more chilling, than is known. This is who is being flooded with very sophisticated weapons.

Brilliant article by Caitlin Johnstone, @caitoz, who writes:
"Carlson introduced Bolsonaro as a leader who opposes “allowing Brazil to become a colony of China,” implanting the idea that this is a real thing in his gullible audience’s mind."
https://caitlinjohnstone.com/2022/07/02/tucker-carlson-is-as-much-a-propagandist-as-anyone-else-in-media/

There is no more important goal for the empire than securing US hegemony by halting the rise of China, and there's no figure more effective in manufacturing consent for that goal than Carlson.
https://caitlinjohnstone.substack.com/p/tucker-carlson-is-as-much-a-propagandist

It's really bad here. On multiple occasions I've had complete strangers start mindlessly regurgitating anti-China propaganda at me in the middle of casual small talk.

@caitoz Unfortunately aussies are particularly rabid and racist about China . Despite our idiot government most of us kiwis dont really care . Adern will be gone in the next election

Empire To Expand NATO In Response To War Caused By...