HomeArticleThey Work To Manufacture Consent Because They Need It. So Don’t Give It To Them.
Article
author: Caitlin Johnstone
0 likes
29171 seen
20 Comments

They Work To Manufacture Consent Because They Need It. So Don’t Give It To Them.

Plutocrat-owned news media outlets lie constantly. When I say this I don’t mean that everything they say is false; many of the events reported by mass media are for the most part factual. Whenever it’s convenient for the loose alliance of western plutocrats, the political establishment those plutocrats own and operate, and the secretive government agencies with which they are allied, the plutocratic media tell the truth to the extent that it advances plutocratic agendas. But only telling the truth when it suits one’s agendas is the same as lying constantly.

A good liar doesn’t simply say the opposite of what’s true all the time; nobody does that. A good liar tells the truth enough of the time to gain a reputation as an honest and trustworthy source of information, and then, when the truth poses an obstacle to their agendas, they put the slightest spin possible on it to nullify that obstacle. They tell half-truths, they omit key pieces of information, and, with really important maneuvers like manufacturing consent for a strategic military destabilization in the Middle East or new cold war escalations against a nuclear superpower, they shift accountability for factual reporting from themselves onto secretive military and intelligence agencies. In this way they keep full control of the narrative and still ensure that the public supports agendas which do not serve the public interest.

This is evidenced by the fact that the public has continued collaborating with a system which kills the ecosystem we depend on for survival and allows people to die of poverty while spending trillions of dollars in needless wars overseas and an ever-expanding Orwellian surveillance network. Everyone besides the most powerful and their lackeys is aware on some level that the current system is not working for them, and yet the overwhelming majority of people keep playing into it by supporting mainstream parties that are fully owned and operated by wealthy oligarchs, and then shrugging and sighing when things keep getting worse.

This is because their consent has been successfully manufactured. Due to the fact that the governed will always vastly outnumber their government, any government necessarily depends upon the consent of the governed. The entire American populace could theoretically wake up tomorrow morning and decide they want to literally eat everyone on Capitol Hill, and there’s not actually anything anyone could do to stop them. The only thing holding existing power structures in place is the fact that the public consents to it, and, in a system which does not serve the interests of the public, the only thing holding that consent in place is the ability of those in power to manufacture it.

So if there’s ever any doubt that international network of ruling elites would pour billions of dollars into controlling public narratives, remember that their power (and potentially their very lives) fully depends on their ability to manufacture the consent of the governed. Whoever controls the narrative controls the world. If they lose control of the narrative, they lose everything.

For this reason it is absolutely essential that consent remains seamless and unbroken throughout every step of the march toward greater and greater oligarchic dominance. If they are unable to manufacture consent for a new war or a new escalation in domestic surveillance or what have you, then they don’t get to have it. This is why no full-scale intervention has happened in Syria or Iran for example, despite relentless mass media propaganda campaigns against the governments of those nations. They work so hard to manufacture consent because they absolutely require that consent, and they can’t move forward with their agendas until they get it.

This is not to suggest that an Iraq-style invasion of Syria or Iran would likely cause a revolutionary war or anything like that; that would be naive. If the US and its allies launched such an invasion the people in those allied nations would be outraged, but they would not be outraged enough to kill and die over it. What would happen, though, is a total collapse in their ability to manufacture consent. And that would be just as fatal to their rule as a full-scale violent revolution. 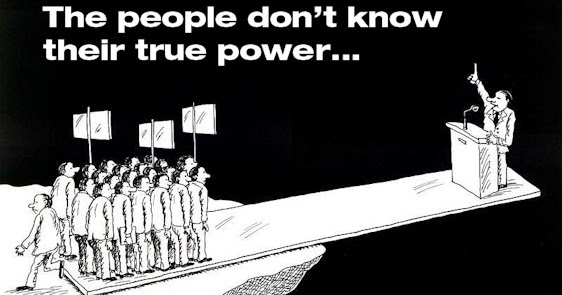 The invasion of Iraq had broad public support, but after it was discovered to have been a catastrophic, immensely costly intervention based on nothing but lies, it is now looked upon unfavorably. If they tried to force another Iraq-style invasion through, the public would not accept the narratives they were fed about it, and they would see the MSM lie factory for what it is. This collapse of the public’s trust in anything the talking heads on TV say would make everyone impossible to propagandize, and thus impossible to rule over. The people would begin telling their own stories about what’s going on, in a way which better reflects reality and better serves themselves instead of the alliance of sociopathic billionaires. If this happened, the old power structures could be shrugged off like a heavy coat on a warm day without anyone firing a shot, simply by the public deciding to rewrite the rules in a way which benefits the public.

This is absolutely essential to be aware of, because it means that we can collectively prevent any agenda from being advanced as long as enough of us refuse to consent to it. And all that needs to happen for that consent to be withdrawn is the exposure of the lies that the mass media is spinning to advance a given agenda.

We’ve already seen this happen with Syria. There was a stretch in April of this year where the mass media machine was cranking out attack editorials on alternative media voices who’d cast doubt upon the establishment Syria narrative, because there was so much opposition to what we were being told to believe about the Assad government that the alliance of plutocrats and intelligence/defense agencies were unable to manufacture support for a large-scale invasion. All they got out of their massive MSM propaganda blitz in April was a meaningless bombing which accomplished essentially nothing, and now the Syrian government is recapturing its territory from the violent jihadists who had seized it with western backing. Had the “think of the children!” propaganda campaign succeeded in the wake of the highly suspicious Douma incident, we would likely have seen a very dangerous and costly western regime change intervention in Syria by now.

And of course, our rulers are acutely aware of this possibility. This is the reason for the current moral panic about “Russian bots”, “Kremlin propaganda” and “fake news”. It’s the reason for the smear campaign against WikiLeaks and the attempts to imprison Julian Assange. It’s the reason for the tightening corporate censorship we’re seeing with Google, Facebook and Twitter. Our rulers are aware that any of their agendas can be thwarted simply by their failing to manufacture consent for them, so any voices which disrupt that consent-manufacturing machine are in the crosshairs for attack and silencing.

But they can’t be too ham fisted about their censorship attempts, because the public would never consent to full-scale totalitarian censorship out in the open. The illusion of freedom and democracy would be shattered, trust in the propaganda machine would die, and the oligarchs would completely lose control of the narrative. The nice guy mask needs to remain firmly in place for any consent manufacturing to take effect; as soon as they remove it they lose the mechanism of manipulation and control that their entire system of rule is built upon. This buys us some time. Not a lot of time, but some.

So the time to strike is now, while the iron is hot. Disrupt the consent-manufacturing machine at every opportunity, because it’s the only thing holding the bars of our cage in place. The new media environment is still ripe for a grassroots campaign to expose the lies of our rulers and shine light on the puppeteers of the kabuki theater using facts, information and intelligent arguments.

So let them have it with both barrels. Blog, tweet, make videos, make memes, engage in debates; any day you can weaken the trust that even one person has in any part of the deception machine is a gain in this battle. Fight their lies with truth and their evil with good will. When you are opposing a depraved power establishment which relies on deceit to sustain its rule, you have truth and light on your side. So fight with absolute certainty in yourself, and give them everything you’ve got. This might be humanity’s last chance.

As Long As Assange Is Silenced, Claims Against Him Are Illegitimate

Democrats Who Smear WikiLeaks Are Assisting Trump's War On The Press

The US empire is quantifiably and indisputably more tyrannical than China. China hasn't spent the 21st century killing people by the millions. China isn't circling the planet with hundreds of military bases and working to destroy any nation which disobeys it. Only the US is.

@caitoz They may be because you literally claimed that you lived under a more tyrannical government that the Chinese.

This is epic entitled Westerner clown who wants to whine about how repressed she is while ignoring actual oppression in other countries.