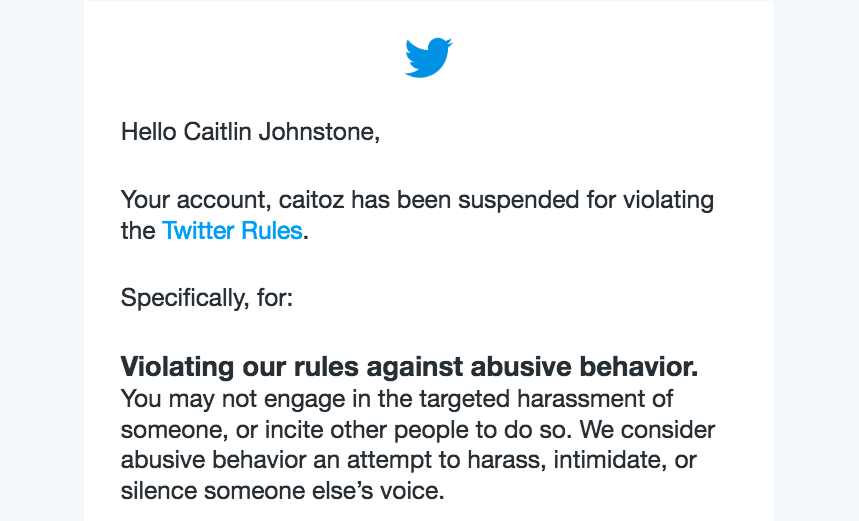 UPDATE: It looks like the suspension was lifted just after I hit publish on this. A lot of my fans and even a few haters made a big noise in objection to Twitter’s actions, and it worked! As we discussed recently, the plutocratic manipulators work so hard to manufacture our consent because they need that consent, and they can’t act if we don’t give it to them. I’ve left the article as-is below for posterity, and so people can see my experience with #Resistance Twitter’s attempt to silence dissident speech. Never stop fighting.

I’ve received an email from Twitter which reads as follows:

Violating our rules against abusive behavior.
You may not engage in the targeted harassment of someone, or incite other people to do so. We consider abusive behavior an attempt to harass, intimidate, or silence someone else’s voice.

Note that if you attempt to evade a permanent suspension by creating new accounts, we will suspend your new accounts. If you wish to appeal this suspension, please contact our support team.

They’re calling it a “suspension”, but nobody can view my page and I can’t perform any activities on it, and it appears to be permanent unless I succeed in going through the anonymous and unaccountable appeals process. Now when people try to access my account, they get a screen that looks something like this depending on what device they’re using:

I haven’t abused anybody, and I’ve been observing extreme caution with my language for the last few days ever since I made a political tweet about John McCain which drew the wrath of #Resistance Twitter. The offending tweet reads as follows:

“Friendly public service reminder that John McCain has devoted his entire political career to slaughtering as many human beings as possible at every opportunity, and the world will be improved when he finally dies.”

I posted this four days ago when John McCain was trending because Donald Trump didn’t pay him any respect when signing the bloated NDAA military spending bill that was (appropriately) named after him. My reason for doing so was simple: the establishment pundits responsible for manipulating the way Americans think and vote have been aggressively promulgating the narrative that McCain is a hero and a saint, and I think it’s very important to disrupt that narrative. If we allow them to canonize this warmongering psychopath, then they’ll have normalized and sanctified his extensive record of pushing for psychopathic acts of military violence throughout his entire political career. They’ll have helped manufacture support for war and the military-industrial complex war whores who facilitate it. Saying we’ll be glad when he’s gone is a loud and unequivocal way of rejecting that establishment-imposed narrative.

Interestingly, I’ve been saying this exact same thing repeatedly for over a year. An article I wrote about McCain in July of last year titled “Please Just Fucking Die Already” received a far more widespread backlash than this one, with articles published about it by outlets like CNN, USA Today and the Washington Post. Whoopi Goldberg and Joy Behar talked about me on The View. I was never once suspended or warned by any social media outlet or blogging platform at that time; it was treated as the political speech about a public figure that it clearly and undeniably is. The only thing that has changed since that time is the climate of internet censorship.

It looks like someone who would say John McCain deserves to die for his role in promoting US wars… but that Assad is just a family man who definitely hasn't slaughtered civilians. pic.twitter.com/ZuNq90nve0

So anyway, I tweeted the thing about McCain, it was getting some angry backlash, and I received an email that a different tweet I’d made about McCain had been reported, reviewed and found not to be in violation. 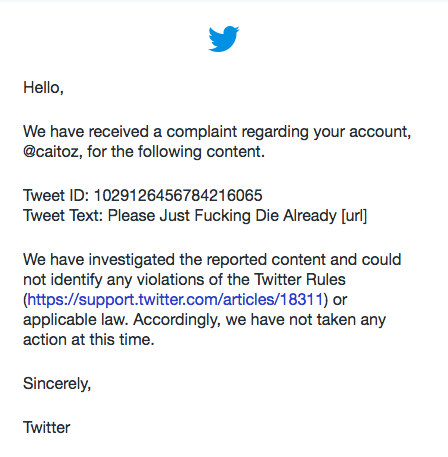 Then a popular #Resist account condemned my post and was retweeted by Caroline Orr, a popular pundit with hundreds of thousands of followers who works with the David Brock propaganda firm Shareblue. Instantly, my Twitter notifications began filling up with comments like these:

To all the people who are reporting @caitoz to the Twitter police, what exactly are you reporting her for? She is not advocating anyone harming #JohnMcCain. She just thinks the world will be better off when he is dead.

If you think her opinions are tasteless, you can block her. https://t.co/1yFgZXNMbL

I also got a bunch of notifications like these from bot accounts as soon as Orr shared the response to my tweet: 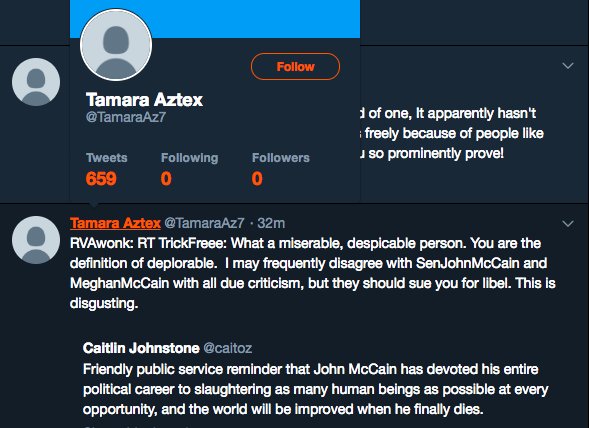 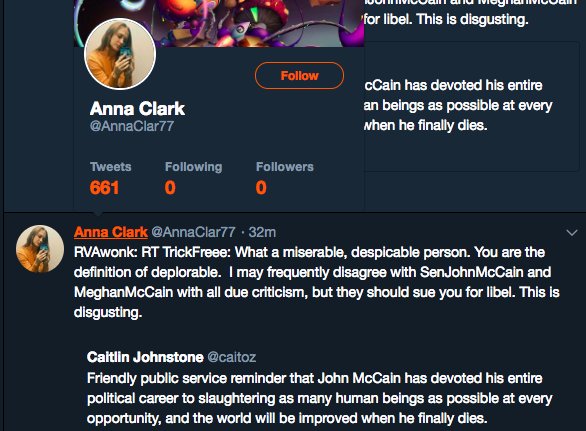 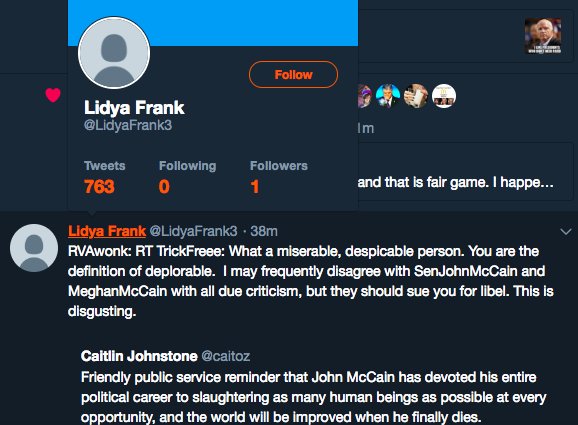 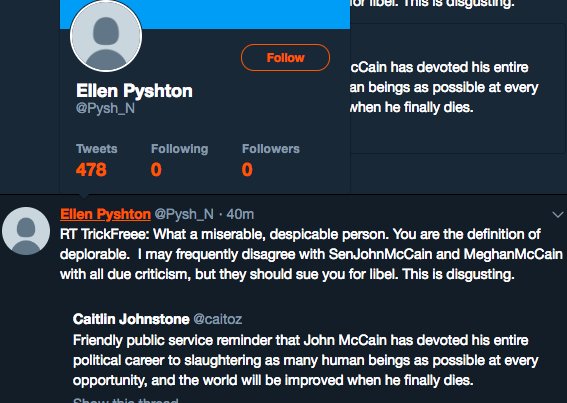 And I’ve received furious, vitriolic notifications from Clintonite Twitter accounts ever since, up until my account was shut down.

So it looks like anyone who voices a political opinion that is deemed sufficiently offensive to Centrist Twitter can be purged in this way now. If you can get enough people reporting the same thing over and over again for a few days, one of those reports will eventually land in the lap of an admin whose personal bias allows them to squint just right at political speech about a public figure and see a violation of Twitter policy.

I’ve been writing about the dangers of internet censorship so much lately because this is becoming a major problem. In a corporatist system of government, wherein government power and corporate power are not separated in any meaningful way, corporate censorship is state censorship. The plutocratic class which effectively owns the US government also owns all the mass media, allowing that plutocratic class to efficiently manipulate the way Americans think and vote so as to manufacture public consent for the establishment status quo upon which those plutocratic empires are built.

Whoever controls the narrative controls the world. The only cracks in plutocratic narrative control have come in the form of alternative media outlets and social media, the access to which is unfortunately guarded by plutocrats with well-documented ties to secretive and unaccountable government agencies. The plutocratic alliance has successfully funneled online audiences into platforms that can be easily regulated, and now they are censoring those platforms.

An ungoverned media landscape would cripple the consent-manufacturing propaganda machine of the ruling oligarchs, making us impossible to manipulate and control. This would give us our only real shot at ending the wars that the John McCains of the world have devoted their lives to facilitating, our only shot at creating true and authentic democracy, and our only shot at turning the world around from the omnicidal, ecocidal trajectory that these sociopathic oligarchs have us on.

They can’t allow that. Their rule depends upon it, and, historically, rulers do not give up power willingly.

The longer we wait to fight this, the more marginalized our voices become, and the smaller our window to escape the cage they are building around us shrinks. Make your voices heard and refuse to consent to allowing a few Silicon Valley plutocrats to manipulate public discourse in their own interest. The time to act is now.

UPDATE 2: Shortly after restoring my account, Twitter locked me out from using it for twelve hours with the notification below. This happened immediately after I had tagged Twitter in a post saying that their restoration was a tacit admission of wrongful suspension, which means smaller accounts without a large audience to advocate for them are surely silenced on a regular basis. So good way to cover your asses I guess, guys.

Internet censorship is closing in, so the best way to make sure you see the stuff I publish is to get on the mailing list for my website, which will get you an email notification for everything I publish. My articles are entirely reader-supported, so if you enjoyed this piece please consider sharing it around, liking me on Facebook, following my antics on Twitter, checking out my podcast, throwing some money into my hat on Patreon or Paypal, or buying my book Woke: A Field Guide for Utopia Preppers.

How To Beat A Manipulator

Some Worship At The Feet Of Roadkill

It Is A Good Time To Appreciate The Insects 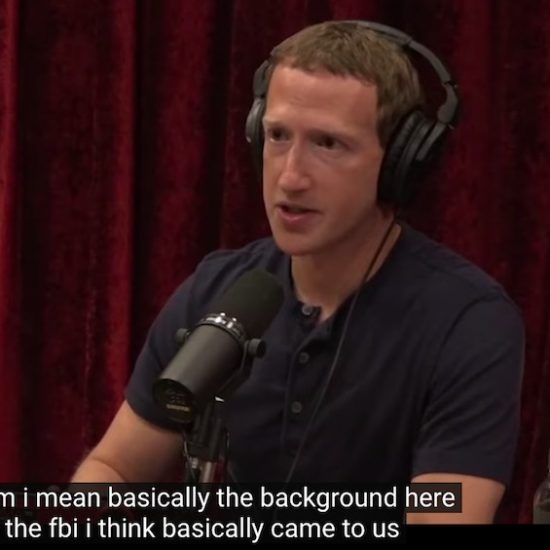 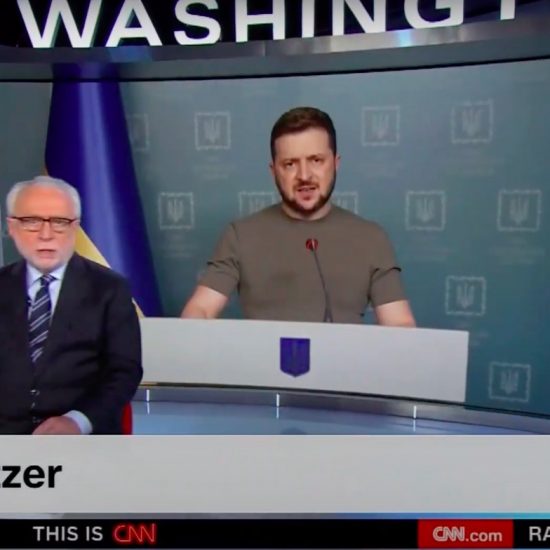 They Lie To Us 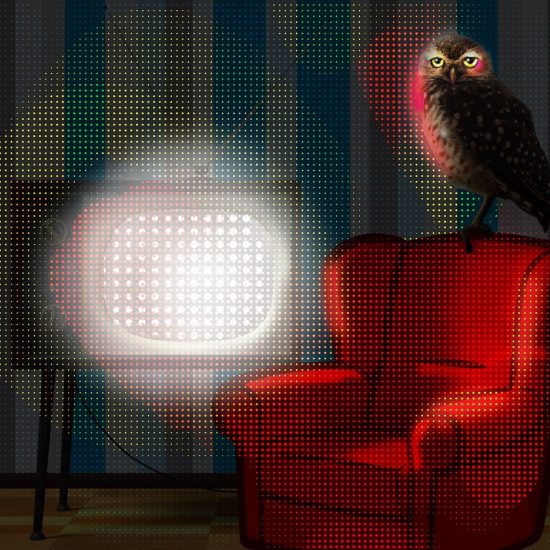 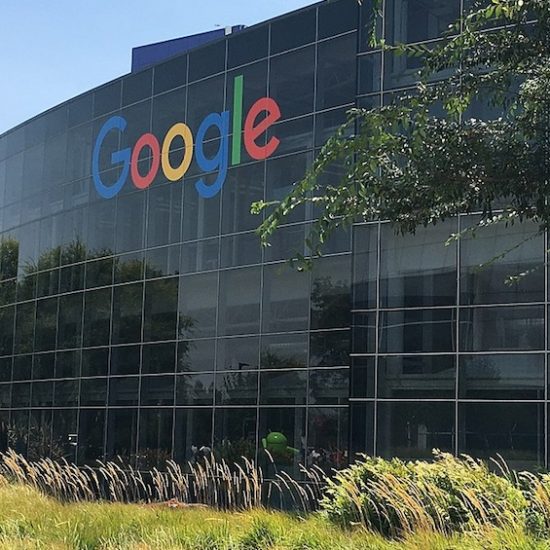 New Media Are As Intertwined With Imperial Power As Old...