The BBC has published an article titled “How Putin’s Russia turned humour into a weapon” about the Kremlin’s latest addition to its horrifying deadly hybrid warfare arsenal: comedy.

The article is authored by Olga Robinson, whom the BBC, unhindered by any trace of self-awareness, has titled “Senior Journalist (Disinformation)”. Robinson demonstrates the qualifications and acumen which earned her that title by warning the BBC’s audience that the Kremlin has been using humor to dismiss and ridicule accusations that have been leveled against it by western governments, a “form of trolling” that she reports is designed to “deliberately lower the level of discussion”.

Turns out jokes are a Russian disinformation conspiracy.
Is nothing safe? What will those barbarian Others think of next? Weaponizing our tears? https://t.co/0CFcTL65q0

“Russia’s move towards using humour to influence its campaigns is a relatively recent phenomenon,” Robinson explains, without speculating as to why Russians might have suddenly begun laughing at their western accusers. She gives no consideration to the possibility that the tightly knit alliance of western nations who suddenly began hysterically shrieking about Russia two years ago have simply gotten much more ridiculous and easier to make fun of during that time.

Couldn’t possibly have anything to do with the emergence of a demented media environment wherein everything around the world from French protests to American culture wars to British discontent with the European Union gets blamed on Russia without any facts or evidence. Wherein BBC reporters now correct guests and caution them against voicing skepticism of anti-Russia narratives because the UK is in “an information war” with that nation. Wherein the same cable news Russiagate pundit can claim that both Rex Tillerson’s hiring and his later firing were the result of a Russian conspiracy to benefit the Kremlin. Wherein mainstream outlets can circulate blatantly false information about Julian Assange and unnamed “Russians” and then blame the falseness of that reporting on Russian disinformation. Wherein Pokemon Go, cutesy Facebook memes and $4,700 in Google ads are sincerely cited as methods by which Hillary Clinton’s $1.2 billion presidential campaign was outdone. Wherein conspiracy theories that Putin has infiltrated the highest levels of the US government have been blaring on mainstream headline news for two years with absolutely nothing to show for it to this day.

Nope, the only possibility is that the Kremlin suddenly figured out that humor is a thing.

The fact of the matter is that humorous lampooning of western establishment Russia narratives writes itself. The hypocrisy is so cartoonish, the emotions are so breathlessly over-the-top, the stories so riddled with plot holes and the agendas underlying them so glaringly obvious that they translate very easily into laughs. I myself recently authored a satire piece that a lot of people loved and which got picked up by numerous alternative media outlets, and all I did was write down all the various escalations this administration has made against Russia as though they were commands being given to Trump by Putin. It was extremely easy to write, and it was pretty damn funny if I do say so myself. And it didn’t take any Kremlin rubles or dezinformatsiya from St Petersburg to figure out how to write it.

“Ben Nimmo, an Atlantic Council researcher on Russian disinformation, told the BBC that attempts to create funny memes were part of the strategy as ‘disinformation for the information age’,” the article warns. Nimmo, ironically, is himself intimately involved with the British domestic disinformation firm Integrity Initiative, whose shady government-sponsored psyops against the Labour Party have sparked a national scandal that is likely far from reaching peak intensity.

“Most comedy programmes on Russian state television these days are anodyne affairs which either do not touch on political topics, or direct humour at the Kremlin’s perceived enemies abroad,” Robinson writes, which I found funny since I’d just recently read an excellent essay by Michael Tracey titled “Why has late night swapped laughs for lusting after Mueller?”

“If the late night ‘comedy’ of the Trump era has something resembling a ‘message,’ it’s that large segments of the nation’s liberal TV viewership are nervously tracking every Russia development with a passion that cannot be conducive to mental health – or for that matter, political efficacy,” Tracey writes, documenting numerous examples of the ways late night comedy now has audiences cheering for a US intelligence insider and Bush appointee instead of challenging power-serving media orthodoxies as programs like The Daily Show once did.

If you wanted the opposite of “anodyne affairs”, it would be comedians ridiculing the way all the establishment talking heads are manipulating their audiences into supporting the US intelligence community and FBI insiders. It would be excoriating the media environment in which unfathomably powerful world-dominating government agencies are subject to less scrutiny and criticism than a man trapped in an embassy who published inconvenient facts about those agencies. It certainly wouldn’t be the cast of Saturday Night Live singing “All I Want for Christmas Is You” to a framed portrait of Robert Mueller wearing a Santa hat. It doesn’t get much more anodyne than that. 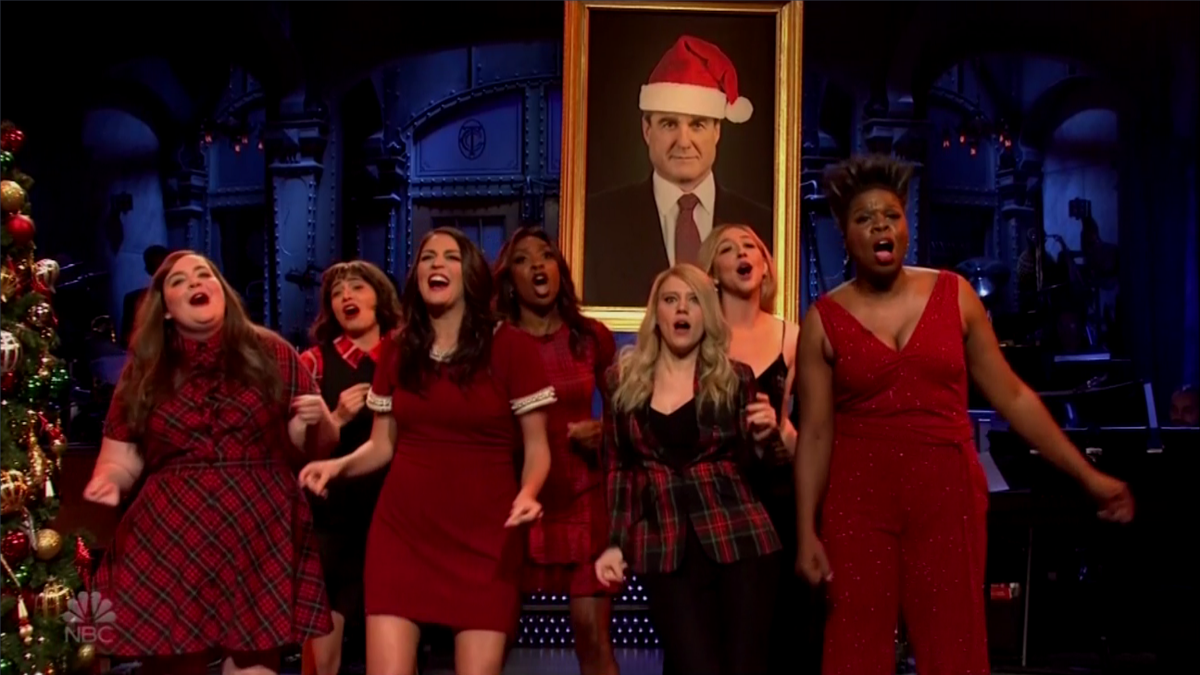 Russia makes fun of western establishment narratives about it because those narratives are so incredibly easy to make fun of that they are essentially asking for it, and the nerdy way empire loyalists are suddenly crying victim about it is itself more comedy. When Guardian writer Carole Cadwalladr began insinuating that RT covering standard newsworthy people like Julian Assange and Nigel Farage was a conspiracy to “boost” those people for the advancement of Russian agendas instead of a news outlet doing the thing that news reporting is, RT rightly made fun of her for it. Cadwalladr reacted to RT’s mockery with a claim that she was a victim of “attacks”, instead of the recipient of perfectly justified ridicule for circulating an intensely moronic conspiracy theory.

Ah well. People are nuts and we’re hurtling toward a direct confrontation with a nuclear superpower. Sometimes there’s nothing else to do but laugh. As Wavy Gravy said, “Keep your sense of humor, my friend; if you don’t have a sense of humor it just isn’t funny anymore.”

That was fun. So, the best way to get around the internet censors and make sure you see the stuff I publish is to subscribe to the mailing list for my website, which will get you an email notification for everything I publish. My articles are entirely reader-supported, so if you enjoyed this piece please consider sharing it around, liking me on Facebook, following my antics on Twitter, throwing some money into my hat on Patreon or Paypal, purchasing some of my sweet new merchandise, buying my new book Rogue Nation: Psychonautical Adventures With Caitlin Johnstone, or my previous book Woke: A Field Guide for Utopia Preppers.

Twenty-One Thoughts On The Persecution Of Julian Assange

“... in 2018 the US military began officially transitioning from emphasis on "counter-terrorism" in the Middle East toward "great power competition" with China and Russia, with the ultimate target being China.”

"At least people who live under more overtly authoritarian governments know who rules over them and who's calling the shots. In that sense, they have more freedom than us." @caitoz https://caitlinjohnstone.substack.com/p/when-will-foreign-leaders-start-asking?r=173b3n&s=r&utm_campaign=post&utm_medium=email

Trapped In The Slaughterhouse