Trump Is Going To Repeat This Until November 2020. Thanks, MSNBC.

After news broke that Robert Mueller had turned in his final report without recommending any further indictments, MSNBC’s Rachel Maddow began frantically retweeting blue-checkmarked Twitter pundits who claimed that since nobody knows the contents of the report yet, the news that the number of Americans indicted for conspiring with the Russian government is set at zero doesn’t matter. 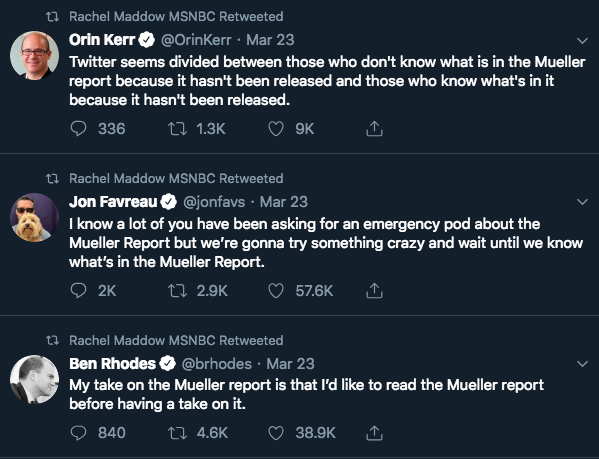 Well guess what, Rachel? We know what the report contains now.

US Attorney General William Barr has sent a letter to congressional officials which you can read here. It contains the following unequivocal quote:

The Special Counsel’s investigation did not find that the Trump campaign or anyone associated with it conspired or coordinated with Russia in its efforts to influence the 2016 U.S. presidential election. As the report states: “[T]he investigation did not establish that members of the Trump Campaign conspired or coordinated with the Russian government in its election interference activities.”

So that’s it then. The central and foundational claim of the Russiagate conspiracy theory has been found to have been completely baseless. The report asserts that Russia hacked and distributed Democratic Party emails (a claim that the public has still yet to see any hard evidence for), and “did not draw a conclusion – one way or the other” whether Trump committed obstruction of justice in the investigation of baseless collusion allegations, but the central and foundational Russiagate claim that Trump and the Kremlin conspired to steal the 2016 election has been killed. Finito. Case closed. Debate over.

And Trump is loving every second of it.

“No Collusion, No Obstruction, Complete and Total EXONERATION. KEEP AMERICA GREAT!” tweeted America’s reality TV star president exactly as you would expect him to, taking some creative license with the actual contents of Barr’s letter.

This is your life for the next 594 days, America. You can expect to hear over and over and over again, from today until November 2020, that the president was victimized for over two years by a “WITCH HUNT” which was “COMPLETE and TOTAL FAKE NEWS!” All Trump will have to do to get re-elected is keep his economy narrative going and repeat the claim that he’s been unjustly persecuted by the establishment “swamp”.

And it will work, because that claim will not be unfounded.  As much of a corrupt establishment crony as Trump has proven himself to be, he does indeed have all the facts he needs to successfully sell the narrative that the political/media class has spent over two years pushing a baseless conspiracy theory that the highest levels of the US government had been infiltrated by the Kremlin, and he can indeed claim persecution and victimization in the process. He can easily leverage this into sympathy and support in his reelection campaign, and can use it to reinforce his tarnished image as an enemy of the beltway swamp. Those who’ve been selling the Russiagate narrative handed him this weapon.

So thanks, Rachel Maddow. Thanks Adam Schiff, Maxine Waters and Eric Swalwell. Thanks CNN and MSNBC, Washington Post and New York Times. Thanks supposed progressives like Bernie Sanders and The Young Turks. Thank you to everyone who spent the first half of Trump’s term helping to push the Russiagate narrative, thereby helping to ensure another four years of this asshole advancing longstanding establishment agendas of war, nuclear brinkmanship and ecocide. Thank you so much for helping to inflict that upon our planet with no regard for the inevitable consequences of your actions.

Here's @mtaibbi: "WMD was a pimple compared to Russiagate. The sheer scale of the errors and exaggerations this time around dwarfs the last mess." https://t.co/ebPl0DW9rs

So are any of the aforementioned offenders admitting any fault on this? Actually, it’s a surprisingly mixed bag.

Sure, you’ve got more Russiagaters than I can count moving the goalposts to possible financial crimes and frantically grasping at the straws of Mueller’s words in Barr’s letter regarding potential obstruction of justice, “while this report does not conclude that the President committed a crime, it also does not exonerate him.” You’ve got MSNBC analyst and “Saint Mueller Preserve Us” t-shirt salesman Malcolm Nance starting up a whole new conspiracy theory that Barr has committed the “greatest scandal in history to coverup the greatest scandal in history,” I guess implying that Barr is lying about the contents of a report that will with absolute certainty be viewed and verified by other people. You’ve got some trying to pretend that Russiagaters never cared about Russiagate at all anyway.

But you’ve also got CNN’s Reliable Sources host Brian Stelter sharing Matt Taibbi’s excellent article titled “It’s official: Russiagate is this generation’s WMD“, which describes the mass media’s spectacular failures to ask the questions that needed to be asked and demand the evidence that needed to be demanded for the claims advanced in the Russiagate narrative. You’ve got NBC’s Ken Dilanian, an actual CIA asset who has been eagerly advancing the establishment Russia narrative, said that “this is a total legal exoneration of the president. Congress will want to know more, of course. But the topline: No conspiracy, no obstruction.” This is highly unusual behavior from such stalwart empire loyalists, and it may be taken as a turning point of sorts on this particular aspect of this particular subject, due solely to the total destruction of any basis for their previous narrative.

But, of course, the damage is already done. Trump has been handed a powerful political weapon which may have ensured his reelection to the White House, and, far, far worse, a new cold war with Russia is now underway which threatens the life of every organism on this earth, facilitated by a political/media class who convinced the public that they could hurt the president by demanding that he take a more hawkish posture toward Russia. That Pandora’s box won’t be un-opened by these new revelations.

Congratulations to Russia-obsessed Democrats for being the single-most valuable contributors to the Donald J. Trump 2020 re-election campaign!

This should be the end of the mass media. In anything resembling a sane world, Rachel Maddow would be unloading her desk into a cardboard box today, and Aaron Maté would become the most respected and highest-paid journalist in America.

This should be the end of the Democratic party. This dismal state of affairs is their fault, from the content of the leaked emails to their handling of it. They have had choices on the way to clean up their act but, they have blankly refused at every juncture. Not one thing has changed since the emails revealed that the DNC rigs its primaries, and yet here we are in the middle of another fake primary with everyone going along with it like it’s a real thing. It’s weird. In a healthy democratic republic the party would be dead already, and a new one would’ve taken its place fueled by fresh energy and enthusiasm but the donor-class corruption is so deeply entrenched that that possibility has seemed like a fantasy.

For now. The next couple of days are going to be very important. As the clamoring din of Russiagate falls into the memory hole, a large empty space will open up. As the pundits scramble to find the Next Big Thing to blare through the screens, the people will be left to their own devices for a few precious moments. They won’t know what to think. They may even have some of their own thoughts for once. The media landscape will resemble a demolition site. So why not use this space to push forward some new exciting ideas. Space means possibilities. Space means something new can be built. After the crushing disappointment of finally finding out that the whole thing was a bust, two years have been lost to the bumbling ineptitude of Pelosi and Schumer, and now impeachment is off the table, what has anyone got to lose? Let’s try something new.

The Illusory Truth Effect: How Millions Were Duped By Russiagate

The universe is becoming more and more perceptive. More and more sentient. More and more capable of knowing itself to greater and greater degrees of depth, breadth, and complexity. It's like a baby slowly developing self-awareness.