“Good Guys” And “Bad Guys” Are A Hollywood Illusion

If you have spent literally any time arguing against western imperialism in any public forum, you have had the experience of being accused of “supporting” one of said imperialism’s targets. If you argue against regime change interventionism in Syria, you’ll get accused of being an “Assadist” or “Assad apologist”. If you argue against regime change interventionism in Iran, you’ll you’ll get people saying that you “support the Mullahs”. Enter into any debate of sufficient liveliness and it’s only a matter of minutes before it happens.

There was a meme going around at the height of the most recent failed coup attempt in Venezuela depicting a white, pink-haired socialist placing their hand over the mouth of a dark-skinned Venezuelan and saying “ACKSHUALLY, MADURO IS THE GOOD GUY”. Proponents of the Trump administration’s attempts to topple the Venezuelan government would share this meme in online debates with anti-imperialists as a way of accusing them of whitesplaining to Venezuelans that they should support an evil dictator who is oppressing them. The idea being, of course, to silence those dastardly socialists using the socially progressive value system they claim to uphold. Checkmate, leftists. 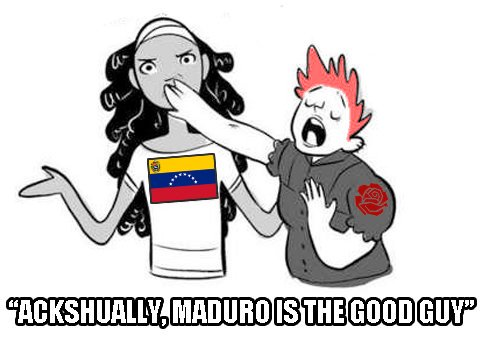 There are obviously a number of things that are wrong with this meme, including the skin pigmentation of the average Guaido supporter, the implication that all Venezuelans oppose Maduro, and the suggestion that only white western leftists oppose the Trump administration’s attempts to install a puppet regime in the nation with the largest proven oil reserves on the planet. But the dumbest thing about it is the implication that someone who opposes US regime change interventionism could only be doing so because they believe that Nicolás Maduro is a “good guy”.

The reason debates about western imperialism so frequently get bogged down by moronic arguments about “good guys” and “bad guys” is because human storytelling devices train us from an early age to constantly frame narratives in those terms. Everything we’ve been taught by TV and movies tells us that if a conflict is happening, someone in it must be the protagonist and someone must be the antagonist, and that our job is to figure out which one’s which.

For as long as humans have been telling stories, this is how they’ve been doing it. A hero wants something, has some kind of adventure trying to get it, but a villain tries to stop them. It’s a recipe for exciting storytelling that’s been used since time immemorial, and it works because the standard human ego is structured to spin mental narratives about itself as the central character whose wants are constantly being fulfilled by friendlies and thwarted by hostiles. Almost every story from the earliest prehistoric campfire circles to the latest Hollywood blockbuster has in essence been nothing other than a storyteller using a simple mind hack to attract the interest and attention of their audience, just by making their narrative relatable using the protagonist/antagonist framework which the ego finds so appealing.

But it’s just an illusion. There are no “good guys” or “bad guys” in real life, either in our personal lives or in international affairs. There are just people. Some of those people do things we like more often than they do things we don’t like, and vice versa, but that’s not a matter of whether they’re “good” or “bad”, it’s a matter of our personal preferences and how we think people ought to behave. “Good” or “bad” isn’t written on anyone’s DNA or inscribed above their heads upon the fabric of reality; we made it up.

In reality, it’s very possible to oppose US regime change interventionism in Venezuela without having a single thought ever appear in your head about whether or not Nicolás Maduro is a “good guy”. American-led regime change interventionism has a well-documented and historically undeniable history of increasing suffering and death in the nations in which it takes place, and consistently fails to accomplish what its proponents claim it will. You don’t need to have any opinions about who Maduro is as a person to recognize this self-evident fact and oppose yet another US regime change campaign in yet another oil-rich nation.

To preempt the inevitable Godwin’s law counter-argument here, of course it’s useful to discern individual behavior patterns in people and talk about what specific patterns they tend to exhibit. Of course it’s useful to recognize that Hitler did many things that we should always oppose going forward. But notice how the only reason Godwin’s law exists is because the “good guys versus bad guys” dichotomy allows people to associate anyone who opposes their side with Hitler, thereby marking them as the “bad guy” side in a given debate. That’s all anyone who fulfils Godwin’s law is ever trying to do.

Think about it: where are we trained to look for heroes in real life? Soldiers and policemen, the violent enforcers of the status quo. Politicians like Donald Trump or Bernie Sanders, depending on which side of the fake partisan divide you’re on. And where are we trained to look for villains? Dictators and rule-breakers, and people who are on the other side of the illusory partisan divide.

Awful convenient for those who benefit from maintaining the status quo, no?

There is one direction in which we are very seldom trained to look for a superhero to come to the rescue, and that’s within. The notion that we ourselves might be the real agents of change in this world is downplayed by the propagandists who fear a surge in populism more than they fear anything else in this world.

Much better to keep people focused on polarizing figures like Donald Trump, who most people seem incapable of viewing as anything other than either a Deep State-fighting superhero or a Hitler-like supervillain whose actions are either all pure good or all pure evil. Divorced from the “good guys vs bad guys” dichotomy, this administration’s behavior can be described in the same way as its predecessors: mostly supportive of the violent and increasingly Orwellian pillars of empire, with a few helpful things mixed in. Yet it’s rare to find anyone who is capable of discussing Trump outside of the false dichotomy. 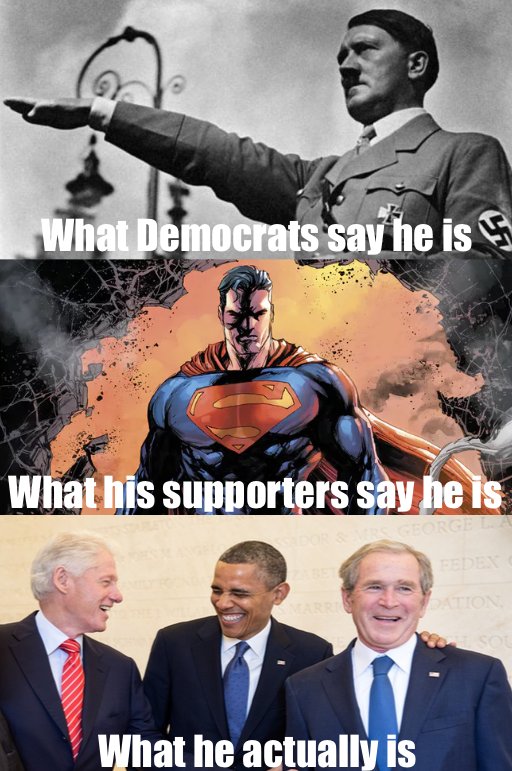 And the same would be more or less true of whoever Trump winds up running against in 2020. Even if by some miracle Bernie Sanders or Tulsi Gabbard overcome the rightward-slanted DNC nomination process and go on to beat Trump in the general election, they will with absolute certainty advance many of the destructive agendas upon which the US empire is built. They are not heroes either. This doesn’t mean they’re villains, it just means that “heroes versus villains” is an illusion we’ve been trained since our earliest media-consuming days to buy into.

The world makes a lot more sense when you peel away the lens from your eyes which perceives life in neat little Hollywood-shaped narratives with protagonists and antagonists and clear beginnings, middles and ends. Because it turns out that we’re all actually a bunch of confused primates doing the best we can with the wildly unique and incredibly complex sets of conditioning we’ve been dealt by our individual birth circumstances and life events. The “good guys versus bad guys” dichotomy is just imaginary conceptual overlay on top of a giant biological storm which carries on in cool indifference to our puny little egocentric narratives.

Atoms swirl, cells cluster, and life lifes away as this strange new species stumbles around trying to make sense of the world with its recently evolved extra gray matter and the capacity for abstract thought which comes with it. It has some successes and many failures in trying to figure out how to make living on this spinning rock a little more harmonious, and it will either succeed or it will fail. It’s egoically comfortable to slice this dance up into a narrative about heroes and villains, good guys and bad guys, but it’s really all one twirling, churning, chaotic and beautiful dance.

The empire is going to need all the leverage it can get in the propaganda campaigns it will need for its scheduled cold war escalations against Russia and China. My guess is empire managers know the contradictions and hypocrisy in the Assange case will pose an obstacle to this.

@caitoz Why is everyone all of a sudden trying to put attention on the brutal treatment of Assange? Did people just wake up and suddenly realize they were wrong with how they've been treating him for the past 12 years?

About fucking time! Now let's see if Australia is allowed to act like a sovereign nation for once and is permitted to defend the humanitarian rights of its citizen.

"Capitalism elevates sociopaths, because profit-seeking competition-based systems reward those who are willing to do whatever it takes to get ahead. That's why we are ruled by sociopaths, and it's why looking to "philanthropy" as a solution to our problems is a ridiculous joke." https://twitter.com/caitoz/status/1597439917478785024

China Keeps Aggressively Surrounding Itself With US Bases

"Everyone knows the US has invaded countries completely unprovoked very recently and will definitely do so again, but we still have to pretend that Putin is the worst thing since Hitler."
https://caitlinjohnstone.substack.com/p/china-keeps-aggressively-surrounding

I would oppose western warmongering against China if it were the most capitalist country on earth. It's got nothing to do with communism; it's just what you do when you are guided by principles instead of dopey partisan brain farts. I know that's hard for you to understand.

@caitoz And to no one’s surprise The commie is angry that her beloved China is getting bashed. You probably wish you could bring the CCP into your country become a loyal member of the state party right

Wow way to completely delegitimize everything you've said about any protest ever.

PM Justin Trudeau: "Everyone in China should be allowed to protest. We will continue to ensure that China knows we will stand for human rights and with people who are expressing themselves."