Establishment Democrats have been flipping out about Susan Sarandon on Twitter. Again. In 2019.

I won’t re-hash the vapid origins of the drama here; if you want you can read about it here. Suffice to say that as usual it originated with Neera Tanden, the Center for American Progress think tank president who says populism undermines democracy. Sarandon’s name trended briefly on Twitter as shots were fired between progressives and establishment loyalists, things got wild over the next couple of days, and now you’ve got Daily Kos editor Armando Lloréns-Sar hastily deleting tweets after a deranged meltdown which culminated in the claim that Bernie Sanders is paying the progressive Our Revolution president Nina Turner to fuck him. 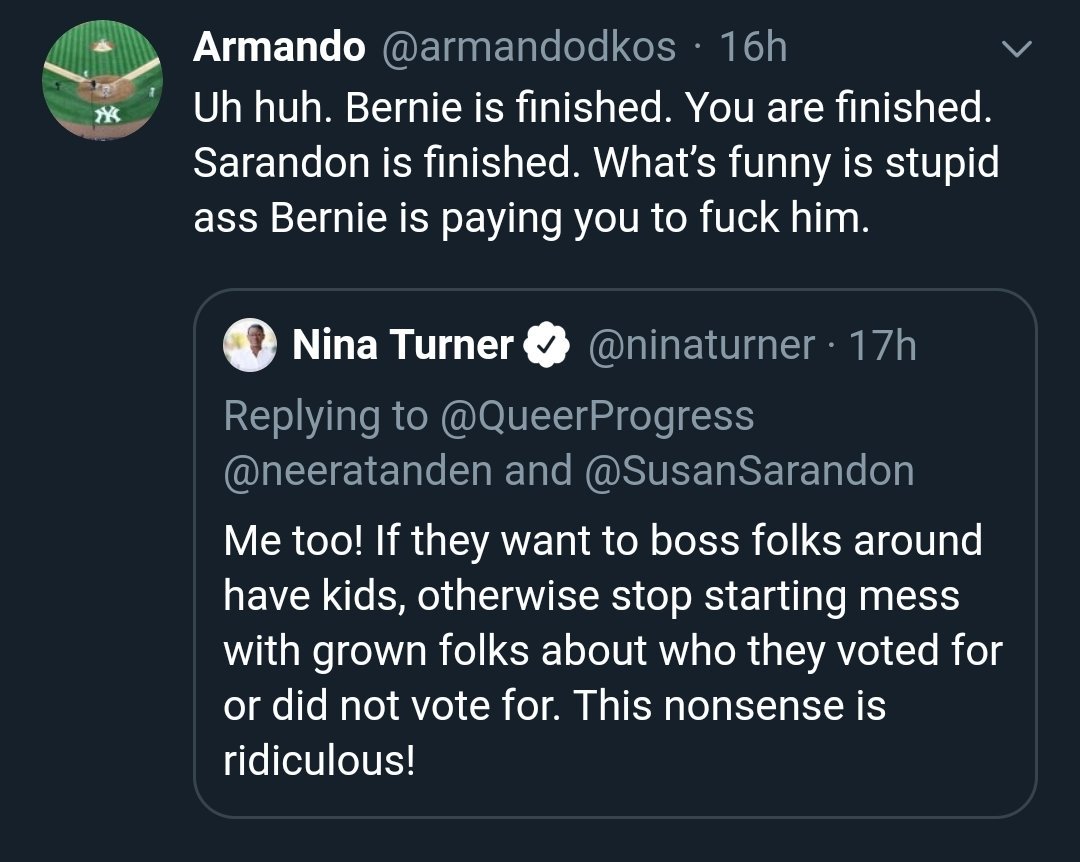 When the Bernie 2020 campaign first started I had little interest, partly because I dislike Sanders’ foreign policy and partly because up until fairly recently his campaign hasn’t drawn much pushback from establishment narrative managers. That has changed explosively in the last couple of weeks. Sometime after Sanders’ appearance on The Joe Rogan Experience, which as of this writing has more than nine million views on Youtube alone, all the usual beltway bootlickers suddenly got extremely shrill and aggressive in using their platforms to attack Sanders, reignite the bogus “Bernie Bro” smear, and tell progressives that they need to fall in line with the Democratic Party regardless of who ends up becoming the nominee. Now we’re seeing some very interesting glitches in the narrative control matrix like mass media pundits freaking out over Bernie’s suggestion that plutocratic ownership taints news reporting and veterans of the news media industry coming forward to say he’s right.

When I say the establishment narrative managers are coming forward to tell progressives to fall in line, I mean up to and including literally saying “fall in line” to them. Brian Fallon, executive director of the liberal advocacy group Demand Justice, recently tweeted, “Fall in love in the primary. Fall in line in the general.” This “fall in line” message is getting piped through all the liberal talking point distribution platforms currently, with Joe Biden’s wife Jill appearing on MSNBC to tell viewers that they must support her husband even if he’s terrible on important life-or-death issues like healthcare.

“So yes, you know, your candidate might be better on, I don’t know, health care, than Joe is, but you’ve got to look at who’s going to win this election, and maybe you have to swallow a little bit and say, ‘OK, I personally like so-and-so better,’ but your bottom line has to be that we have to beat Trump,” Jill Biden said.

This to me captures the spiritual agony that must haunt neoliberal Dems. You're smart enough to know that your policies hurt people, but you're driven to hide that by a sense of entitlement that your circle deserves power regardless. Sometimes that deeper, hidden truth comes out: https://t.co/0GPlk71WqR

This new escalation in hyper-aggressive browbeating has been about as subtle as a brick, and leaders of America’s progressive movement have noticed.

“Folks on this website are so used to being able to personally vilify and bully anyone they disagree with, they’re now outraged that people like Brihana Joy Gray, Nina Turner, myself and others aren’t taking it silently anymore,” tweeted Sanders campaign speech writer David Sirota. “We are civil — but we respond. If that has you shook, too bad.”

Indeed, establishment liberals have been reacting with shock and indignation that anyone would dare to defend themselves from their appalling smears. Establishment pundit Soledad O’Brien is so unaccustomed to any challenge whatsoever that she thought it made sense to caption Nina Turner’s perfectly reasonable response to Tanden’s sleazeball remarks with the comment, “Ahhh the warm rhetoric of the Bernie team. Always a delightful tenor and encouraging for voters who are undecided.”

Only to the most entitled mindset could the idea of someone correcting a smear be construed as an attack. It’s the same kind of response authoritarian parents have to their children “talking back”.

[Ahhh the warm rhetoric of the Bernie team. Always a delightful tenor and encouraging for voters who are undecided.] https://t.co/K59v6aaUFT

“The Beltway hostility to Bernie Sanders is about the power structure,” Sirota also said. “He’s the only candidate who makes the political elite’s connections and networks irrelevant. If you run a corporate think tank, you will be irrelevant under a Sanders presidency. That’s why he scares you so much. Let me add one thing: every single person in DC knows that this is true — they know that the Beltway hatred of Bernie is fundamentally based on a fear of total irrelevance and loss of insider influence. They will pretend it’s about something else, but it’s not. And they know that.”

I think it’s fair to say that the left-punching, bullying behavior of establishment Democrats in August of 2019 is now already around the level it was at in October of 2016. If it’s not at that level yet it will be soon. The 2020 election is still very far away, so we can bet that things are going to get much, much more hostile between the two factions in the future.

And that’s a good thing. For months the establishment narrative makers have been bleating the line that Democrats need to refrain from fighting each other because it’s helping Trump and/or Vladimir Putin, but in a media environment that is stacked in favor of more establishment-friendly candidates, not fighting would just be handing a win to the guardians of the status quo. If progressives want to have a chance they’re going to have to fight with extreme aggression; calls for politeness and civility are always anti-populist in nature and serve no one but the establishment.

If there is going to be class warfare in this country, it's about time the working class won that war.

The beltway pundits were able to choke down their rage and vitriol for a few months of the presidential race, hoping against hope that the Sanders campaign would be eclipsed by fauxgressives like Elizabeth Warren and Pete Buttigieg and kill his numbers in the polls. As soon as it became clear that this wasn’t going to happen, the friendly mask fell off and the claws came out.

That’s good. Now it’s a clean, fair, honest fight: toe-to-toe, gloves off, and no holds barred. Without the false container of civility and politeness, narratives are much harder to control, and populist narratives have an easier time emerging. Neera made a major miscalculation.

The Oligarchy's Plans For Our Future Keep Getting Dumber

How To Awaken From The Matrix Using Self-Enquiry

"Oh, my morning's coming back, the whole world's waking up
All the city buses swimming past, I'm happy just because
I found out I am really no one"
https://youtu.be/7-lMTr41Fzw

“America is a unipolar superpower governed by octogenarians who work for corporations and banks where military weapons are made by prison slaves to be launched at impoverished foreigners while celebrities attend lavish galas and police guard food in dumpsters from the homeless.” https://twitter.com/caitoz/status/1438670636025462787

"Why is there a labor shortage?"
There's not a labor shortage, there's a paying people enough to live shortage.
"So people aren't coming to work because they're tired of being robbed by the boss?"
Yep. The problem with capitalism is you eventually run out of other people's money.

“It's weird how nobody's saying the vaccine isn't working as well as they'd hoped it would. You're not allowed to say that. Everyone's really disappointed but they're pretending they're not because anything but 100 percent big-smile cheerleading gets you branded an anti-vaxxer.” https://twitter.com/caitoz/status/1438671131221716995

"A liberal will get angrier about a random member of the public circulating a conspiracy theory than about government agencies killing children with bombs."
https://soundcloud.com/going_rogue/propaganda-scrambles-our-minds