HomeArticleExposing War Crimes Should Always Be Legal. Committing And Hiding Them Should Not.
Article
author: Caitlin Johnstone
2 likes
17745 seen
47 Comments

Exposing War Crimes Should Always Be Legal. Committing And Hiding Them Should Not.

The Kafkaesque extradition trial of WikiLeaks founder Julian Assange continues, with each frustrating day making it clearer than the day before that what we are watching is nothing other than a staged performance by the US and UK governments to explain why it’s okay for powerful governments to jail journalists who expose inconvenient truths about them.

The Assange defense team is performing admirably, making the arguments they need to make to try and prevent an extradition that will set a precedent which will imperil press freedoms and creating a chilling effect on all adversarial national security investigative journalism around the world. These arguments appear to fall on deaf ears before Judge Vanessa Baraitser, who has from the beginning been acting like someone who has already made up her mind and who has been reading from pre-written judgements at the trial regardless of the points presented to her (an unusual behavior made all the more suspicious by her supervision under Chief Magistrate Emma Arbuthnot, who has a massive conflict of interest in this case).

And while it is essential to fight this fight with every intention of winning, I’d also like to issue a friendly reminder that this entire trial is illegitimate at its very foundation. 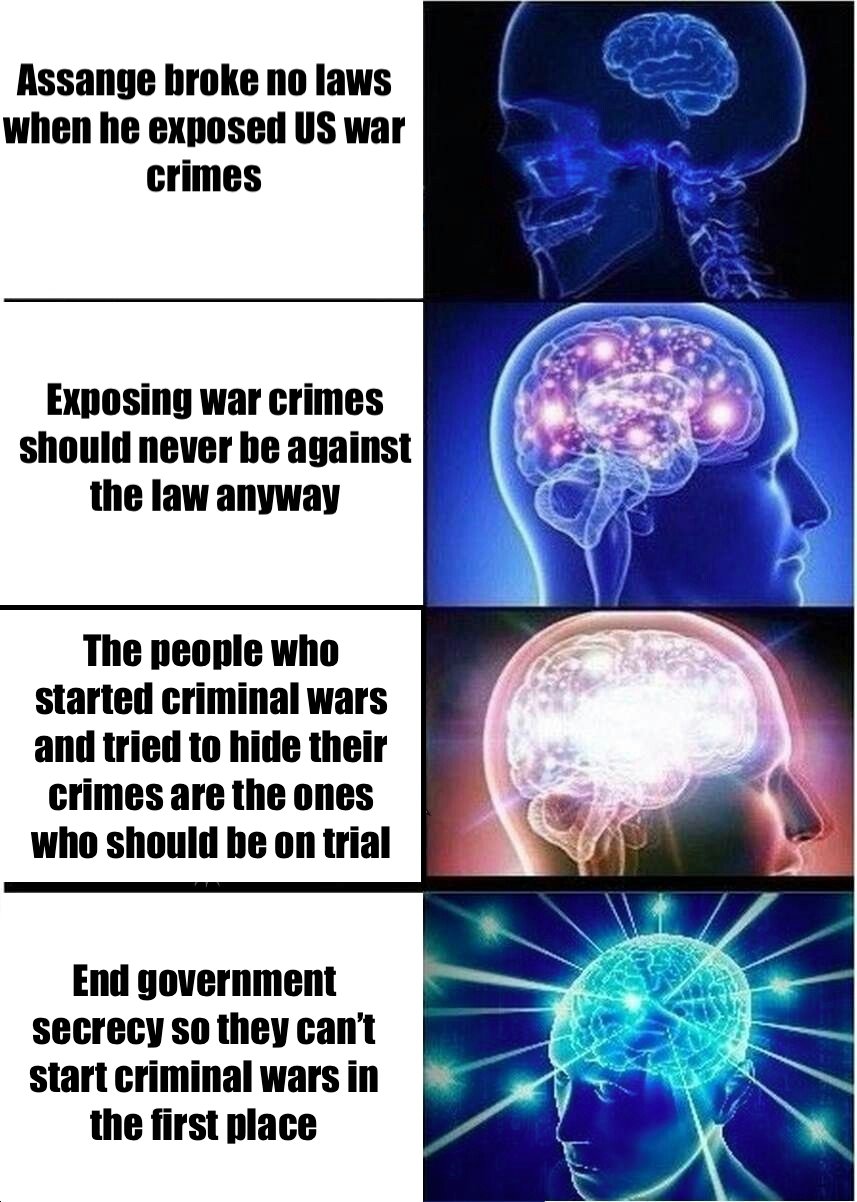 The Assange case needs to be fought tooth and claw, but we must keep in mind that it is so very, very many clicks back from where we need to be as a civilization. In an ideal situation the public should have governments too afraid of them to keep secrets from them; instead here we are begging the most powerful government in the world to please not imprison a journalist because he arguably did not break the rules that that government made for itself.

Do you see how far that point is from where we need to be?

It’s important to remember this. It’s important to remember that the amount of evil deeds power structures will commit is directly proportional to the amount of information they are permitted to hide from the public. We will not have a healthy world until power and secrecy have an inverse relationship to each other: privacy for rank-and-file individuals and transparency for governments and their officials.

In a healthy world, the most powerful government on earth wouldn’t be trying to squint at its own laws in such a way that permits a prosecution of a journalist for telling the truth.

In a healthy world, the most powerful government on earth wouldn’t prosecute anyone for telling the truth at all.

In a healthy world, governments would prosecute their own war crimes instead of those who expose them.

In a healthy world, governments wouldn’t commit war crimes at all.

In a healthy world, governments wouldn’t start wars at all.

In a healthy world, governments wouldn’t keep secrets from the public, and wouldn’t have any cause to want to.

In a healthy world, if governments existed at all, they would exist solely as tools for the people to serve themselves, with full transparency and accountability to the people.

We are obviously a very, very far cry from the kind of healthy world we would all like to one day find ourselves in. But we should always keep in mind what a healthy world will look like, and hold it as our true north for the direction that we are pushing in.

The Human Species Is Acting Like A Self-Destructive Individual