The DC Circuit has ruled that the CIA is under no obligation to comply with Freedom of Information Act requests pertaining to its involvement with insurgent militias in Syria, overturning a lower court’s previous ruling in favor of a Buzzfeed News reporter seeking such documents.

As Sputnik‘s Morgan Artyukhina clearly outlines, this ruling comes despite the fact that mainstream news outlets have been reporting on the Central Intelligence Agency’s activities in Syria for years, and despite a US president having openly tweeted about those activities.

“In other words, the CIA will not be required to admit to actions it is widely reported as having done, much less divulge documents about them to the press for even greater scrutiny,” Artyukhina writes, calling to mind the Julian Assange quote “The overwhelming majority of information is classified to protect political security, not national security.”

My latest: Despite extensive reporting by the @WSJ & CIA-vetted @nytimes confirming it happened, a DC court has sided with the @CIA, finding that a Trump tweet doesn't constitute proof that it funded al-Qaeda in #Syria. https://t.co/NFaQBrggV5

The CIA’s brazen collaboration with dangerous extremist factions seeking to topple Damascus, and its equally brazen refusal to provide the public with any information about the extent of its involvement in Syria from the earliest stages of the violence in that nation onwards, will necessarily provide fodder for conspiracy theories.

Of course they will do this. Why wouldn’t they? Why would anyone give the lying, torturing, propagandizing, drug trafficking, coup-staging, warmongering, psychopathic Central Intelligence Agency the benefit of the doubt and assume their actions in Syria have been benevolent just because the hard facts have been hidden behind a wall of government secrecy?

Yet they will be expected to. Anyone with a sufficient degree of influence who comes right out and says the CIA knowingly armed violent jihadists with the goal of orchestrating regime change in Syria will be attacked as a crazy conspiracy theorist by the narrative managers of the establishment media. If their words are really disruptive to establishment narratives, there will be calls to deplatform, unemploy, and ban them from social media.

I'd forgotten how shameless and demented the imperialist narrative managers get whenever anyone in a position of influence contradicts the imperial narrative about what's happening in Syria. Mentally replace their words with "STOP INTERFERING IN OUR GLOBAL PROPAGANDA CAMPAIGN!" https://t.co/Sd5HCCklkW pic.twitter.com/O9XonJBHfo

And really such is the case with all the melodramatic garment rending about the dangers of conspiracy theories today. All the fixation on the way unregulated speech on the internet has contributed to the circulation of conspiracy theories conveniently ignores the real cause of those theories: government secrecy.

If the most powerful government in the world were not hiding a massive amount of its behavior behind increasingly opaque walls of secrecy, people would not need to fill in the gaps with theories about what’s happening, because there would be no gaps; they would simply see what’s happening.

“But Caitlin!” one might object. “How could America engage in all its military operations around the world if it didn’t keep information about its behaviors a secret?”

Government secrecy is indeed necessary for winning wars. Government secrecy is also necessary for starting those wars in the first place. US government agencies have an extensive history of using false pretenses to initiate military conflicts; if they could not hide the facts behind a veil of government opacity, the public would never engage in them. The American people would never have allowed their sons to go to Vietnam if they’d known the Gulf of Tonkin incident was a lie. They’d never have sent their sons and daughters to invade Iraq if they’d known weapons of mass destruction were a lie. They would lose the support of the public, and the international community would refuse to back them. 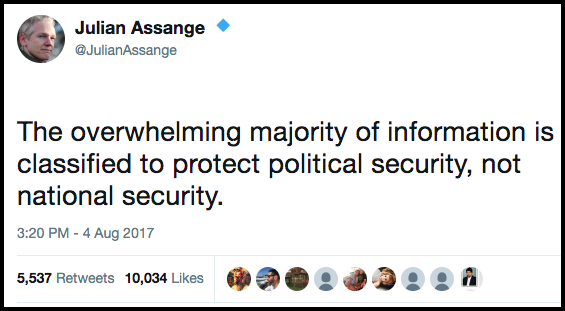 Protecting the lives of foreign military and intelligence personnel is the primary argument against government transparency in the United States, a premise which takes it for granted that there need to be foreign military and intelligence personnel at all. The only reason the lives of troops and intelligence officers would be endangered without massive walls of government secrecy is because those personnel are out there facilitating imperialist acts of mass murder and tyranny. The argument is essentially “Well we can’t tell you the truth about what’s happening in our government, because it would mean we’d have to stop doing extremely evil things.”

The argument that the internet needs strict censorship to eliminate dangerous conspiracy theories takes it as a given that simply eliminating government secrecy is impossible, which in turn takes it as a given that the US government cannot simply stop inflicting grave evils around the world. Our ability to share information with each other online is therefore ultimately being increasingly choked off by monopolistic Silicon Valley megacorporations because no one in charge can fathom the idea of the United States government ceasing to butcher human beings around the world.

That is the real underlying argument over internet censorship today. Should people have free access to information about what their own government is doing, or should their government be permitted to do evil things in secret while people who form theories about what they’re doing are shoved further and further away from audibility? That’s the real debate here.

The US government has powerful agencies whose literal job is to conspire. The fact that people are punished and condemned for forming theories about how that conspiring might take place, even while those agencies are completely lacking in transparency, is abusive.

If the government was not doing evil things in secret, then it wouldn’t need secrecy. If the government didn’t have secrecy, there would be no conspiracy theories. Stop pointing your attacks at powerless people who are just trying to figure out what’s going on in the world amidst a sea of government secrecy and propaganda, and point your attacks instead at the power structures that are actually responsible for the existence of conspiracy theories in the first place.

When America Voted Out Fascism: Notes From The Edge Of The Narrative Matrix

I Desire Your Freedom

Maturity Is Realizing That Propaganda Isn’t Something That Only Happens...