HomeArticleCuba, Space Billionaires, And Other Notes From The Edge Of The Narrative Matrix
Article
author: Caitlin Johnstone
2 likes
6396 seen
86 Comments

Many leftists shy away from speaking out against western imperialism because they see international dynamics as too complex, when really it’s the least complex part of the capitalist empire. The world’s largest power structure murders human beings to exert control. See? Very simple.

If you understand that police brutality is a problem or that oligarchs are robbing the working class, then the idea that they’re also holding together a globe-spanning empire using nonstop mass murder should be super easy. Only propaganda spins it as more complicated than that. Once you see how simple it is, how profoundly evil it is, and how all the other abuses of the empire depend on it, you understand that opposing the war machine of the US-centralized power alliance should be the very foremost priority of any leftist. It is the head of the beast.

US interventionism is literally always disastrous and literally never accomplishes what its proponents claim it will, yet any time there’s any strife anywhere in the world you get Americans saying “We’ve got to DO something!”

Why no. No you do not. Please, please please don’t.

The US government is waging wars around the world, circling the planet with military bases, ramping up nuclear standoffs and working to destroy any nation which disobeys it, so naturally the news media are urgently warning us about the horrible tyrannical government of Cuba.

Yes the US has been deliberately strangling Cuba with the goal of fomenting unrest. Yes it has been attempting regime change ops in Cuba up to and including invasions and hundreds of assassination attempts. No you may not blame the US for unrest in Cuba, you goddamn tankie freak.

If you try to connect unrest in Cuba with the USA’s extensive history of interventionism there, people yell at you for denying the Cuban people’s “agency”. Agency, agency, agency, agency. They’ll factor in all sorts of agency except the Central Intelligence kind.

It’s wild how the US has an intelligence agency whose actual job is causing instability and unrest in nations who disobey the its dictates, and it has a very extensive and well-documented history of doing so, but you get called a crazy idiot if you say “CIA” during periods of unrest and instability in those nations.

Only a deranged lunatic would suggest that the CIA might be doing the thing it literally always does.

I’m teaching my kids about socialism by unilaterally imposing sanctions on their food and toys and then when they complain saying “See this proves socialism doesn’t work.”

Space colonization will never happen. It’s a delusion promoted by billionaires who have a vested interest in marketing the idea that the ecologically unsustainable nature of status quo capitalism can be resolved by turning humanity into a spacefaring species. They are lying.

The most forceful defenders of Elon Musk are always also rabid capitalism proponents: they know that if billionaires can’t save us from the consequences of ecocidal capitalism using technological innovations, then their entire worldview is invalid. But they can’t, and it is.

Ecological collapse is coming up far faster than getting even a single living thing to Mars, but all the Mars people want to talk about is their dumb rockets. It’s like the house is on fire but your toddler wants you to stop and play Thomas the Tank Engine with him. 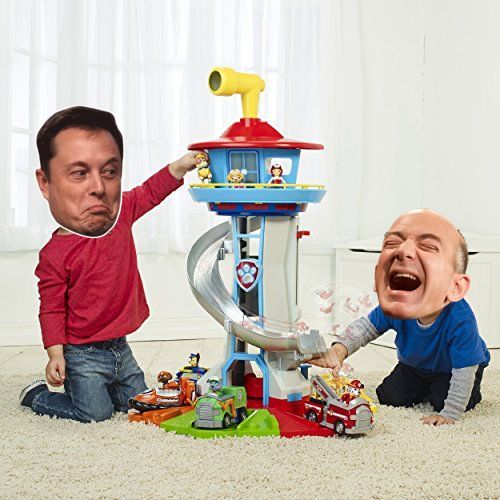 I write words for a living yet I cannot find any which adequately express my rage at people who think it’s fine that ecocidal capitalism is killing our home because Daddy Elon is going to fly us all to Mars.

The solution to humanity’s problems is not to attempt the impossible task of fleeing to space, it’s to transcend our self-destructive patterning and move into a collaboration-based relationship with each other and with our ecosystem. Just like any individual who refuses to accept responsibility for their predicament, we’re collectively flailing all over the place to place the solution anywhere but on us changing. We’ll either become a conscious species or we’ll die. There are no other options on the table.

Anarchism sounds good in theory but in practice it just means regurgitating foreign policy talking points from the US State Department on the internet.

Only those who have not metamorphosed personally rule out the possibility that humanity can metamorphose collectively.

It's true that knowledge is power. That's why the powerful work to control people's access to knowledge through the internet and news media. It's also why there's privacy for the powerful and radical transparency for the public, instead of the other way around as it ought to be.

All political commentators and analysts are just taking their best guesses about what's going on in an unpredictable world with power structures hidden behind walls of government secrecy. Nobody's more qualified than you to interpret and understand information about our world.

What a relief. My son just hugged me and said "mommy the kids in cages are being moved to Gitmo!" Tears of joy and tears of sadness.

The number of immigrants detained by ICE has increased by 70% under Biden.

But have you noticed how media coverage of US abuse of migrants disappeared when Biden became president?

Democrats are often not the lesser evil but rather the more effective evil
https://truthout.org/articles/number-of-immigrants-detained-by-ice-has-increased-70-percent-under-biden/

House to Vote on Amendments to End Support for War in Yemen
An amendment that would prohibit a US presence in Syria without congressional approval will also be voted on
by Dave DeCamp
@DecampDave #Yemen #SaudiArabia #Syria
https://news.antiwar.com/2021/09/22/house-to-vote-on-amendments-to-end-support-for-war-in-yemen/

Propaganda Is The Source Of All Our Problems: Notes From The...