HomeArticleOur Rulers Have All The Power And None Of The Responsibility
Article
author: Caitlin Johnstone
1 likes
11576 seen
76 Comments

Our Rulers Have All The Power And None Of The Responsibility

As the world burns, as ecosystems die off, as the insects vanish, as the forests disappear, as soil becomes rapidly less fertile, as extinction takes over, as the oceans gasp for air and become lifeless deserts while continents of plastic form in their waters, it is interesting how often you hear the sentiment that this is the result of some flaw in humanity for which we all share equal guilt.

And the things we do get to vote on don’t count because our dominant political systems are owned by corporate elites. And even if they weren’t it wouldn’t matter because those elites use media propaganda to brainwash us at mass scale and manufacture our consent for the ecocidal paradigm that has turned them into modern-day kings.

1. The oceans are being killed.
2. Forests will soon be gone.
3. Fertile soil is disappearing.
4. Megafauna risk extermination.
5. Insects are vanishing.
6. Climate chaos is inevitable.
7. Extinction is now.
8. Plastic is in our blood.

None of this is front page news.

The kings of today do not live as the kings of old. They don’t sit on thrones publicly issuing decrees to their subjects; they hang out in the background behind the theatrical performance of the officially elected government, quietly funding think tanks and corporate lobbyists, buying up media, bribing politicians with campaign donations, rigging the system, amassing more and more wealth and power, and shaping the fate of our world.

In our extinction existence of invisible kings and wall-to-wall lies, those with all the wealth and power are completely free of responsibility, while their rank-and-file victims are made to justify their very existence to the system every day and pay through the nose for every misstep. None of the world’s worst people are in prison, and if you tell the police your employer stole your wages you’ll get a very different response than if your employer tells them you stole from the company.

Extreme heat roasting parts of North America is not a mere weather event – it's evidence of a crime.

The oil industry deceived us for decades knowing its operations would create mass death events like this.

They are living as kings on wealth they made by raping the planet we all live on, whose health we all depend on for survival, and because their mass media propaganda is so successful it hardly ever even occurs to anyone that they should have to pay for it. They take what they want and do as they please, at our expense, for free. They are spoiled little boys with flamethrowers.

This cannot stand. The one area in which we do have power is the fact that there are a lot more of us than there are of them, a fact that secretly terrifies them which they spend vast amounts of energy making sure we never notice ourselves. As folk singer Utah Phillips famously said, “The Earth is not dying, it is being killed. And those who are killing it have names and addresses.”

But this insight does us no good if only a few of us realize it. Until a critical mass of the human collective rises up against these sociopathic ecocidal tyrants, we won’t be able to stop them. But stop them we must, which is why it’s so important to spread awareness of what’s going on and where the blame really lies. All positive changes in human behavior are always preceded by an increase in awareness, whether it be individually or collectively. 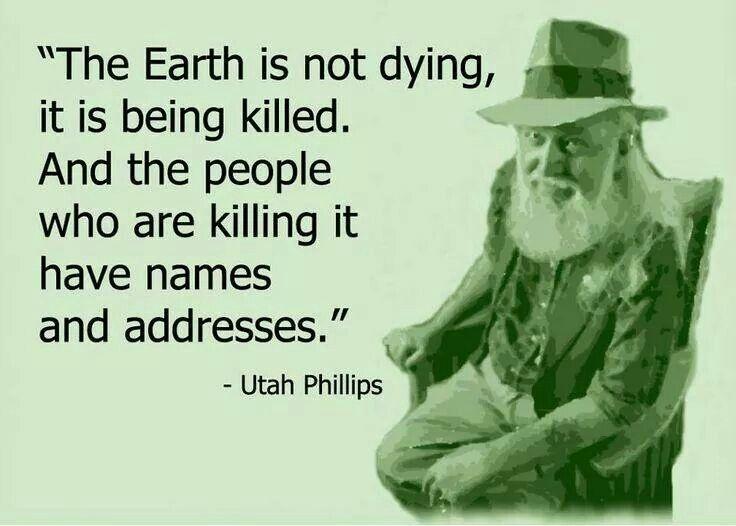 And from there, perhaps we can create a healthy world directed not for the greed of the few but for the good of everybody. Where scientific endeavor is poured not into creating billionaires and finding new ways for the war machine to kill people but into ways we can harmoniously collaborate with our natural environment.

If we can’t find some way to pull this off, humanity’s epitaph will read, “In the end it was easier to let them kill the ecosystem than to take away rich people’s rocket money.”

We can all decide that we're sick of being lied to, sick of being manipulated, sick of the completely backward status quo of secrecy for the powerful and surveillance for everyone else. And we can use the power of our numbers to force that change. https://twitter.com/caitoz/status/1543822546704814081

Whenever I say very lefty things for a few days in a row I always get a few rightist followers freaking out and saying something has gone disastrously wrong with my neurochemistry. Can't possibly be that I'm a leftist interpreting current news stories from a leftist perspective.

Australia continues to prove its lack of sovereignty by pouring money into the Ukraine black hole despite zero chance of success. Lap dog of US imperialism. Labor government locks in austerity at home, does nothing to help Australians suffering inflation & poverty. Thanks @AlboMP https://twitter.com/michellegrattan/status/1543762486511341570

Albanese announces $100 million in military aid for Ukraine, pledging support for 'as long as it takes' https://theconversation.com/albanese-announces-100-million-in-military-aid-for-ukraine-pledging-support-for-as-long-as-it-takes-186291?utm_source=twitter&utm_medium=bylinetwitterbutton via @ConversationEDU

Study US Foreign Policy By Looking At Oil Reserves: Notes...

Billionaires Only Come To The Rescue In Movies And Comic Books

Revolution, Awakening, And Leaving Abusive Relationships All Happen In Unexpected...