Crypto Invalidates The Money Narrative: Notes From The Edge Of The Narrative Matrix

It’s trippy how a government that’s been democratically elected by free people behaves in exactly the same way you’d expect a government to behave if it was run by corporations.

I just cannot understand how we keep failing to solve the world’s problems using a system of making as much money as you can while paying your workers as little as you can and offloading as many of your costs onto the biosphere as possible.

What’s funny about Joe Rogan is he clearly didn’t start off with an oppositional relationship to the mainstream media; that opposition was thrust upon him by the mass media constantly lying about him and smearing him for having a large audience without conforming sufficiently to establishment groupthink.

This was the most significant part of the Rogan-Gupta exchange, and it's not getting enough attention. The media class' open disdain for Rogan is turning him further and further against them, and now it's got him asking if western media run propaganda for US foreign policy. pic.twitter.com/26bEeaNJvZ

So now you’ve got someone with a massive platform who nobody can control openly asking if the public is being propagandized by the media about nations targeted by the US-centralized empire. If he keeps chasing that rabbit, things could get very interesting and/or very ugly.

“I can say whatever I want in my country!” Yeah you can say whatever you want on a desert island too, and because your status quo is locked in place in countless ways it will make the exact same amount of difference.

The financial elite hate crypto not because crypto itself poses a threat to their empire, but because its existence is destroying trust and belief in the “realness” narrative of money among regular people. Bitcoin is imaginary, but it’s worth real money. Why? Because money is also imaginary.

The complexity of the markets is absolutely essential in controlling the narrative around why a few live like kings while the rest work like slaves just to keep a roof over their heads. You, regular person, are not meant to understand it. Because if you did it could not continue.

I’ve always hated Monopoly. What a tedious, vindictive waste of a perfectly good afternoon. I am so pissed off that we’re going extinct over what essentially is just a global game of Monopoly that virtually none of us want to play.

In the escalations between the US and China, one is the aggressor and the other is acting defensively. You can tell which is which by asking yourself how the other would react if the situation was reversed. If China started doing this to the US there would be war instantaneously: 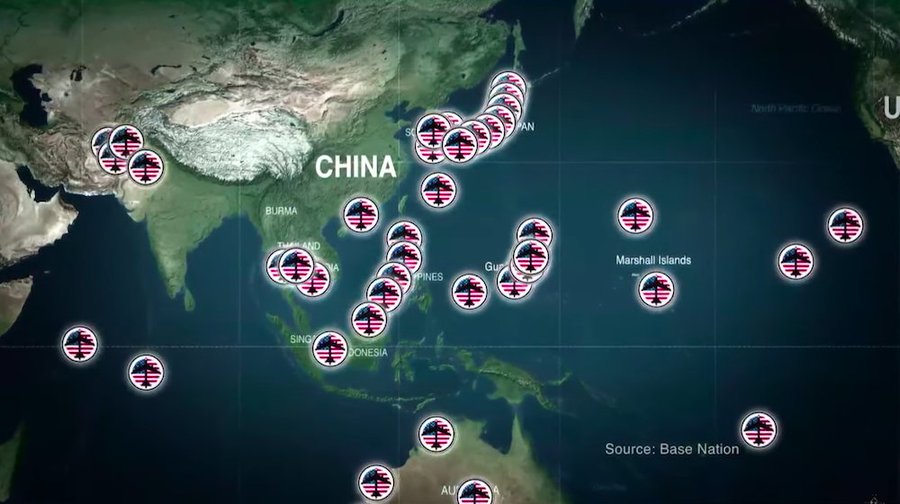 People say “That military presence is to protect China’s neighbors from Chinese aggression.”

Look up all the USA’s murderous interventions in Central and South America. China would be far more justified setting up a military presence to protect nations like Cuba and Venezuela. Yet it doesn’t. This means between the US power alliance and China, Washington is the aggressor and Beijing is acting defensively in response to that aggression. The reason western news media do not report on these escalations in this way is because western news media is propaganda.

When you’re used to being in power a movement toward equality can feel like a personal attack. Marginalized groups being elevated gets turned into “There’s a war on white men!” China refusing to let the US rule the world gets turned into “China’s trying to take over the world!”

That there would be a second cold war was guaranteed after the success of the first one. If your empire succeeded in attaining global hegemony in a game of subversion and manipulation which happened to greatly enrich your military-industrial complex, why wouldn’t you do it again?

I mean sure you’re gambling the life of every terrestrial organism every day you roll the dice on brinkmanship with nuclear-armed nations, but you wind up sitting pretty if your gamble pays off and the world doesn’t get incinerated. It’s a no-brainer for people with no brains.

Seems like every country on earth gets compared to Nazi Germany except the imperialist one that’s been slaughtering people by the millions to conquer the world because it believes it’s exceptional.

If:
✅ Police come to your doorstep
✅ To question you about social media posts
✅ And interrogate you about protest activity

Then you do not live in a free country. #auspol https://t.co/zif5CySsD7

Things are so deeply, deeply fucked in so very, very many ways, and they are getting worse so very, very fast. And because status quo narrative control is so effective, hardly anyone is even aware of this. If humanity makes it out of this mess alive, it will look like a miracle.

We are where we are because of our collective conditioned behavior patterns. Any movement away from our self-destructive patterning will necessarily come from an unpatterned direction, and will therefore be unexpected and unanticipated. That’s why it will look like a miracle.

We go on because we go on. Because our heart keeps beating and our lungs keep inhaling, and because the human organism is deeply hardwired to desire life, and because life is beautiful and delightful. We fight on because what the hell else are we going to do?

As power-driven agendas of global conquest give rise to international propaganda wars that are increasingly turning our information ecosystem into white noise and indecipherable gibberish, people may soon cease looking outside themselves for truth and begin looking within.

It Takes A Lot Of Education To Keep Us This Stupid

This country and this world needs a loud, unruly and relentless anti-war movement.

Always excellent, this piece from Caitlin makes a profoundly important point that must be understood and internalized in this time of unprecedented changes https://twitter.com/caitoz/status/1483452701451390978

@caitoz They point at socialist systems when there’s strife and say “see? The system is bad.”

But under capitalism? It’s always the individual whose the problem - and the system remains pure and unstained.