Colin Powell, creator of the viral anti-war meme featuring himself holding a stage prop while lying to the United Nations about Iraqi weapons of mass destruction, has died at the age of 84.

Over the years Powell’s meme has been an invaluable asset for opponents of western military interventionism and critics of US propaganda narratives about empire-targeted nations, serving as a single-image debunk of any assertion that it is sensible to trust the claims US officials make about any government that Washington doesn’t like.

In online discourse the Powell meme makes the perfect response to anyone regurgitating an unsubstantiated claim about a government that has been targeted for disobeying the dictates of the US empire.

“We must remove Assad by any means necessary because he’s killing Syrians with poison gas!”

“Russian hackers are attacking our democracy!”

It stops the conversation in its tracks, using a single image that doesn’t even contain any words. Now the conversation is about what it should be about: the indisputable fact that US officials lie. They lie brazenly. They lie even if it can lead to the deaths of millions of people. Any narrative about any empire-targeted government that is backed by US officials must be presumed false unless and until it has been backed by mountains of independently verifiable evidence.

Other memes have emerged in recent years to criticize the absurdity of western war propaganda which are not without their own charm, like the “Really makes you feel like you’re part of history” one and all its variants:

Or the one about Republican bombs vs Democrat bombs:

But nothing has ever emerged that rises to the level of efficacy and utility as the simple image showing Colin Powell lying to the entire world about a government the Bush administration wanted to destroy.

Powell’s deceitful performance was after all picked up and parroted as “irrefutable” proof about Saddam Hussein’s WMD operations by the very same mass media institutions which tell us we must ramp up aggressions against other foreign governments on equally insubstantial claims today. It was a pivotal moment in the propaganda war the US-centralized empire was waging upon our minds to convince us that it would be good and smart to do something evil and stupid. 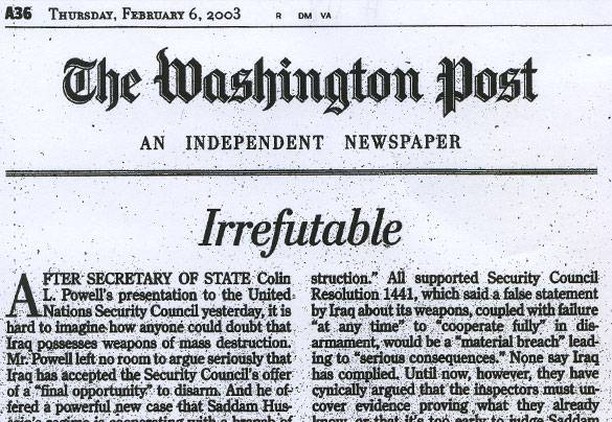 Powell’s other contributions to the world include covering up and participating in war crimes in Vietnam, facilitating atrocities in Central America, and destroying Iraqi civilian infrastructure in the Gulf War. But it’s hard to dispute that his greatest lasting legacy will be his immortal reminder to future generations that there is never, ever a valid reason to trust anything US officials tell us about a government they wish to bring down.

Be sure to remind everyone of Powell’s sociopathic facilitation of human slaughter often and loudly in the coming hours. Public opinion is the only thing keeping western war criminals from The Hague, after all, and those war criminals are keenly aware of this fact. At times like these, they suddenly become highly invested in making sure that regular people “respect the dead,” not because they respect any human alive or dead, but because they cannot allow the death to become an opportunity to amplify and change public opinion about their egregious murderous crimes.

There is a giant narrative management exercise that will be playing out over the next few days. Be sure to enthusiastically disrupt it with the truth.

The Drivers Of Empire Want To Rule As Greek Gods

@thehill Imagine going to college and getting a degree in journalism and then writing an article for the Hill about how the green M&M is changing her shoes for inclusivity.

Communication lines in #Yemen have been targeted by US/Saudi/UAE airstrikes tonight. Last I heard, Hodeidah was under bombardment. We haven't had contact with relatives in Yemen over the past couple of hours, and I haven't seen much activity from Yemenis on Twitter either.

BREAKING: Outraged to learn that Biden has named @Chevron lawyer Jennifer Rearden to be a federal judge. She was paid millions at @gibsondunn to help jail me, attack Indigenous peoples, and cover up a massive oil spill in the Amazon.