HomeArticleDonald Trump Is The Most Honest US President Of All Time
Article
author: Caitlin Johnstone
1 likes
91481 seen
154 Comments

Donald Trump Is The Most Honest US President Of All Time

I happened upon some pictures from Trump’s UK visit with Queen Elizabeth yesterday, which isn’t something I’d normally care about. The British royals are basically just oligarchs who rub your face in it, and the fluffy media publicity around a monarch of one murderous kleptocratic  imperialist regime meeting the leader of another murderous kleptocratic imperialist regime is something I’d usually try to avoid looking at or commenting on.

I’ve paid exactly zero attention to the stories about the visit itself, so if you want to know what kind of tea they drank or how Trump got along with Lord Hothalbotham and the Duchess of Yorksquire or whatever you’ve come to the wrong place. But I saw one photo from the visit that made me stop and realize something that is definitely worth noting: Donald Trump is the most honest US president of all time.

To be clear, I am not saying that Trump actually tells the truth with his words; he obviously does not. Trump is so comfortable with lying that he once tweeted the claim that he’d never urged House Republicans to vote for a particular immigration bill, three days after posting a tweet explicitly urging House Republicans to vote for that bill. He left both tweets up. I mean, that’s like one click away from literally looking someone in the eye while urinating on their leg and telling them it must be the rain.

No, when I say that Trump is the most honest US president of all time, what I mean is that he has a unique gift for exposing the face of the empire for exactly what it is, in all its depravity, all its deceitfulness, all its corruption, and in this case, all its jaw-dropping ridiculousness. I mean, look at this photo: 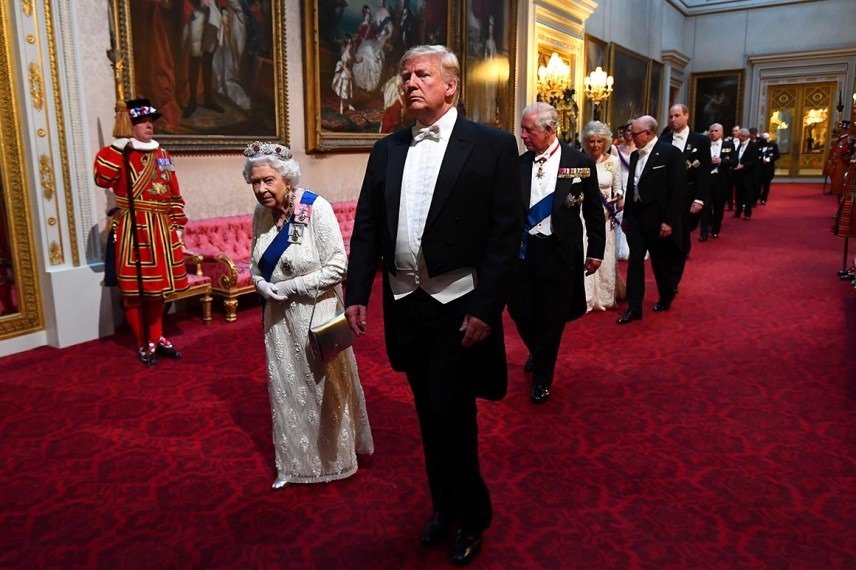 Really look at it. Have you ever seen anything so ridiculous? Who the fuck dressed him? And what’s going on with that freak in the red dress? And why are these rich assholes all walking in formation? Is it some kind of weird parade for people who’ve never bought their own groceries?

Obama could have made this look normal. Bush would have looked a little bit goofy, but nothing that would make you spit your coffee on your screen. Hell, Bill Clinton would have looked downright at home, like he was born in Buckingham Palace and spent his whole life sipping champagne and groping the maids while he waited for this photo to be taken. It took the badly-dressed awkward posture and golf bod of a reality TV star who became president via 4chan prank to expose that whole absurd royalty display for the risible self-parody that it deserves to be seen as.

Trump’s entire presidency has been like this. Blatant, tactless, and completely unmasked.

Journalist gets literally butchered in an embassy by the Saudi government? Yeah well we don’t want to do anything about that because they’ve got an arms deal with us worth billions of dollars. He just comes right out and says it. When they want to stage a coup in Venezuela, they don’t limit it to CIA covert ops and behind-the-scenes manipulations; the whole administration is on Twitter saying they’re going to keep starving everyone with sanctions until the nation’s president is replaced with the guy they prefer. It’s all right there, right in your face, as closeted and secret as Flavor Flav’s fondness for clocks. His whole cabinet is basically human versions of the departments they represent. His Secretary Treasurer was a Goldman Sachs executive. His CIA Director literally tortured people. His National Security Advisor is an Iraq-raping Bush-era neocon. His Secretary of Commerce is a former Rothschild executive. His EPA Administrator is a former coal lobbyist. His Secretary of State came straight out of the CIA. It’s like he designed a convenient labeling system for everyone who’s unsure of what it is that each department in the executive branch of the US government actually does.

Trump has been continuing and expanding all of the depravities of his predecessors, but he’s been doing so openly, making it look exactly as ugly and disgusting as it is. His supporters try to justify this by claiming he’s making brilliant 4-D chess maneuvers against the Deep State, but Trump isn’t playing chess. He isn’t even playing checkers. He’s playing Uno, and he’s playing it with his hand fully exposed on the table, with his only defense being to point at a red card and say “This one’s green” and point at an eight and say “That’s a two. It’s the best two, absolutely terrific two.”

Even his dishonesty is honesty, in a way. He lies constantly, brazenly and unapologetically, while his predecessors have lied sneakily, subtly and usually only by distortions, omissions and half-truths. Trump is a walking public service announcement that US presidents are liars. Which is the truth.

And I for one think that’s great. It’s entirely possible that Trump will be ousted in 2020 by Joe Biden or by one of Joe Biden’s 397 ideological clones who are also in the race, and that will make a lot of people very happy. It will make them happy because they won’t have to look at the ugly face of Orwellian dystopia anymore, because an infinitely smoother and more charismatic leader will go back to hiding it for them. And then things will at long last go back to normal, the way they always were: no partisan divisiveness, no corrupt politicians, no racism in America, and brunch all day, every day.

And if that happens, fine, whatever; it’s not like they were taking any meaningful action against the ugly face of empire anyway. But at least things got shaken up with a little honesty for a while. A little corrupt, blood-spattered, button-popping honesty.

The best way to get around the internet censors and make sure you see the stuff I publish is to subscribe to the mailing list for my website, which will get you an email notification for everything I publish. My work is entirely reader-supported, so if you enjoyed this piece please consider sharing it around, liking me onFacebook, following my antics on Twitter, throwing some money into my hat on Patreon or Paypal, purchasing some of my sweet merchandise, buying my new book Rogue Nation: Psychonautical Adventures With Caitlin Johnstone, or my previous book Woke: A Field Guide for Utopia Preppers. For more info on who I am, where I stand, and what I’m trying to do with this platform, click here. Everyone has my unconditional permission to republish or use any part of this work (or anything else I’ve written) in any way they like free of charge.

If It Feels Like You’re Being Manipulated, It’s Because You Are

When You Lie It’s Misinformation, When They Lie It’s Cool: Notes From The Edge Of The Narrative Matrix

Plunge your nation into debt to the US for the privilege of fighting a proxy war for the US.

Debt trap alert: US Senate unanimously passed a Lend-Lease program that threatens to trap Ukraine in debt in return for US "aid" to fight a proxy war on Russia

Britain did not pay off its 1945 Lend-Lease debt until 2006 and it sabotaged the pound sterling
https://www.atlanticcouncil.org/blogs/ukrainealert/lend-lease-for-ukraine-us-revives-wwii-anti-hitler-policy-to-defeat-putin/

WAR IS PEACE? Blanket calls for more arms, more sanctions, more destruction are unweaving any chance at ending this war. MEP Angel Dzhambazki, fined one day prior for performing a nazi salute in the parliament, questions the morality of anti-war politics. Not in my books…

"If it seems weird to you that so many self-styled leftists are responding to this war by fanatically supporting the extremely dangerous unipolarist geostrategic agendas of the most powerful empire that has ever existed, that's because it is weird. Really, really, really weird." https://twitter.com/caitoz/status/1513506903468691463

If It Feels Like You're Being Manipulated, It's Because You Are

"If you've got a gut feeling that your rulers are working to control your perception of the war in Ukraine, it is safe to trust that feeling."
https://caitlinjohnstone.substack.com/p/if-it-feels-like-youre-being-manipulated?s=w

The very *best* description of Australia’s election coverage you will ever hear.
Once you’ve seen this, you’ll never watch the election news the same way again.
#auspol https://twitter.com/mediaanalystoz/status/1466143705111228421

In 2010 American professor Jay Rosen came to Australia and nailed it with "horse race journalism".

His damning critique of Insiders, and Leigh Sales' defensive reaction, is worth it alone

Nigeria Is Planning A False Flag In Switzerland: Notes From...

A Sense Of Perspective, If You Please: Notes From The...

Elizabeth Will Die Soon And Then We’ll Have A “King”...

Super Serious News Reporting: Notes From The Edge Of The...