A friend told me yesterday that he hadn’t seen an antiwar protest in America in ten years. It was a sincere comment; he genuinely hadn’t seen any coverage on any peace activism in his country during that time. And of course he hadn’t; it is mainstream media’s job to distort public narratives in favor of the war-hungry plutocratic class which owns the media outlets. But I’ve actually been noticing a lot of antiwar activism lately which, while often far from the spotlight of mass media attention, has given me much hope for the future.

It is true there was a noticeable lull in vocal demonstrations against military violence since George W Bush left office, largely due to mainstream US partisan dynamics. Mainstream liberals supported Obama, so they avoided bringing attention to his continuation of Bush’s policies of mass murder, while mainstream conservatives ignored the Obama administration’s violence since they focused on attacking him as a weakling and a terrorist sympathizer, and of course had no ground to stand on for any criticisms of warmongering after supporting eight years of Bush. Some antiwar activism did happen in the US during that time, but not much.

And, bizarrely, we’ve seen a mutation of this trend continue well into the Trump administration, with mainstream liberals herded into holding demonstrations in support of the empty Russiagate conspiracy theory. The mass media-endorsed collusion narrative has fed into an anti-Russia hysteria among Democratic Party loyalists that has been used to manufacture support for dangerous cold war escalations and an obscenely bloated military budget, while any objection to Trump’s warmongering and advancement of longstanding neoconservative agendas has been intentionally lost in the shuffle. 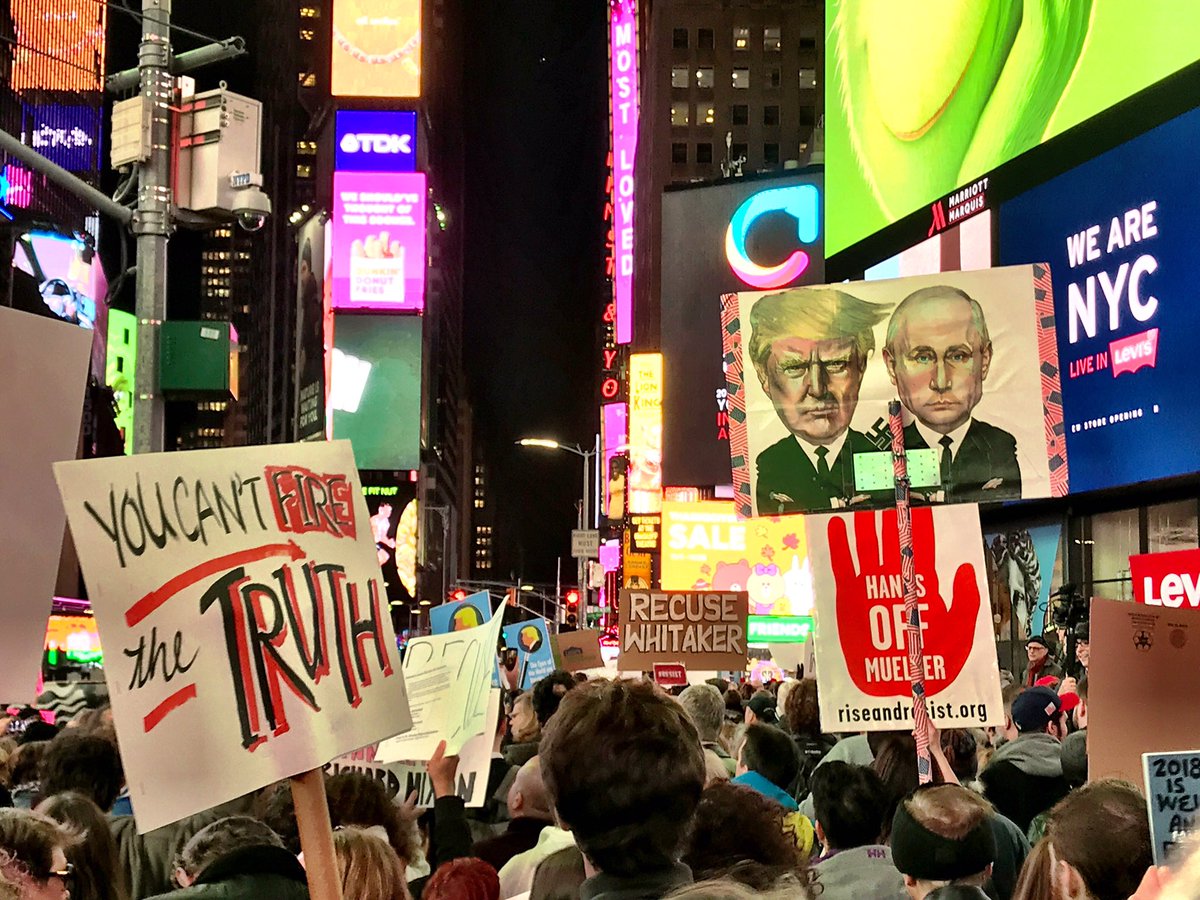 So it’s understandable if folks are unaware that there has been a shift in things sometime in the latter half of this year, and we are now seeing more antiwar activism in America than we’ve seen in years. Here are six recent examples:

Happening now: Iraq & Afghanistan #veterans have blocked entrances to the National Constitution Center in #Philadelphia where @JoeBiden is awarding the "Liberty Medal" to @GeorgeWBush. Dozens of veterans of his wars are outside refusing to leave. #veteransday #vereransday2018 pic.twitter.com/Vodh6r8xbC

Who: About Face – Veterans Against the War, Stacy Bannerman and other activists.

Where: The National Constitution Center in Philadelphia, Pennsylvania.

Why: Hague fugitive George W Bush and his wife Laura were presented with the Philadelphia Liberty Medal by former Vice President Joe Biden for, of all things, their work with veterans.

How: Protests of the awards ceremony both inside and outside of the National Constitution Center which can be heard throughout the entirety of recordings of the event. Chants of “No awards for endless wars”, megaphones and blown whistles made sure everyone was aware that this event was being strongly objected to, and activist Stacy Bannerman returned her Freedom Medal to Bush inside the building.

2. Women’s March on the Pentagon

Who: 1,500 angry women and male allies, along with a who’s who of the most badass women on America’s antiwar scene, including Cindy Sheehan, Medea Benjamin, Mnar Muhawesh, Sameera Khan, and Jill Stein.

Why: “Our demands are simple: The complete end to the wars abroad; closure of foreign bases; dramatically slash the Pentagon budget to fund healthy social programs here at home: the only good empire is a gone empire.”

How: A coordinated effort among high-profile activists helped draw an unusual amount of turnout and interest in this first-time event, receiving coverage from a surprising number of outlets. A very successful event, hopefully the first of many.

Where: The Hudson Institute, a right-wing think tank.

Why: Pompeo lackey Brian Hook and his neocon buddies were explaining why it is good and right that the Trump administration withdrew from the Iran nuclear deal in order to slam that nation with starvation sanctions.

How: Medea Benjamin stormed onto the stage like fucking Godzilla and condemned the US imperialist agendas against Iran as security staff struggled in vain to remove her. “That is the most ridiculous thing I have seen,” Benjamin cried. “The world community wants to keep the Iran nuclear deal. Our allies — the Germans, the French, the British — they want to keep in this deal. The world community wants to keep the deal. Let’s talk about normal countries. Let’s talk about Saudi Arabia. Is that who our allies are? They are the biggest threat to the world community. And let’s talk — you’re hurting me. You’re actually hurting me. I want to ask: Do you think these sanctions are hurting the regime, or are they hurting the Iranian people? They’re hurting the Iranian people. You are making a case for war with Iran. How did the war with Iraq turn out? You’re doing exactly the same thing we did in the case of Iraq. We don’t want another war in the Middle East. Let’s see, how did Iraq turn out? How did Libya turn out? We have the people of Syria suffering. And how dare you bring up the issue of Yemen? It’s the Saudi bombing that is killing most people in Yemen. So let’s get real. No more war! Peace with Iran!”

Who: Some hundred protesters, many of them university students.

Why: War criminal Henry Kissinger was invited to speak at an NYU business school event, and people weren’t having it.

How: Loud protests both inside and outside of the event attracted a tremendous amount of attention and media coverage, including a segment on Fox News in which huffy, sputtering pundits wagged their fingers at the young demonstrators for interrupting the nice vampire. Old Henry was called a war criminal to his face, which was of course awesome.

We just disrupted war hawks Mike Pompeo & John Bolton at the United Against a Nuclear Iran Summit to say that we need #peacewithIran! Take action to echo this message at https://t.co/ou7EXAceXp pic.twitter.com/4QHBgsKdBy

Where: The “United Against a Nuclear Iran Summit” in New York.

How: Individuals sprung up from the audience crying “Sanctions are a weapon of war!” and “We want peace, we don’t want war!” The demonstration attracted attention from the mainstream media, including the Washington Post.

Who: Longtime antiwar activist Cindy Sheehan, whose son was killed in the Iraq war.

Why: The Saudi coalition’s destruction of Yemen has caused the worst humanitarian crisis on earth, with the continuing help of the United States.

How: As of this writing Sheehan is on Day 10 of a 27-day fast in protest of the starvation, disease and violence that is being inflicted upon the people of Yemen with the support of the US government. Sheehan is encouraging people to join her in her hunger strike on Thanksgiving weekend to draw attention to the cause. Cindy took up the baton from Pamela Bennett who was on a hunger strike before her, and that baton can also be taken up by anyone else any time in any way of their choosing.

Capitalism Is Violence: Notes From The Edge Of The Narrative Matrix

The Boy And The Starfish And The Yawning Chasm Of Infinity

This is UNBELIEVABLY sleazy. This claim, designed to paint China as racist, was debunked in real time by @DanielDumbrill and others and its source deleted their tweet. Daily Mail cites THE DEBUNKED SOURCE for this article but doesn't provide a link because the claim is withdrawn. https://twitter.com/MailOnline/status/1453052757271846932 4

'[Capitalism] is violent. It is aggression. It is simply legalized theft. The only reason this isn't obvious to everyone is centuries of capitalist propaganda.' —@caitoz

BREAKING: After 100 pages of legal briefing, the appellate court today denied my release in 10 words. This is not due process of law. Nor is it justice.

I must report to prison by tomorrow afternoon. We will get through this.💪❤️

BREAKING: After 100 pages of legal briefing, the appellate court today denied my release in 10 words. This is not due process of law. Nor is it justice.

I must report to prison by tomorrow afternoon. We will get through this.💪❤️

Anyone Who’d Support Going To War Over Taiwan Is A...

Australians Need To Decide If This Is The Kind Of...