In a sane world, being a neoconservative would carry the same social stigma as being a child molester or a serial killer. It would be something that you are aggressively shunned and rejected for and kept far away from society so that you can’t do any harm, not something that wins you acclaim and MSNBC panels spots and appointment as UN ambassador.

I am not being hyperbolic here. Neoconservatism is not some political ideology which can be placed on a left-to-right spectrum based on one’s ideas about fiscal policy and social issues, it is the civilian-slaughtering American supremacist agenda to butcher, bomb, sanction, starve, bully and manipulate the world population in order to ensure the hegemony of the US-centralized power establishment. I am not condemning an opposing set of political opinions here, I am condemning the mass murder of innocent men, women and children.

Neoconservatism is what fuels support for the war machine which has scattered hundreds of military bases all over the planet, which armed terrorist factions in Syria killing half a million people, which created a failed state in Libya, killed a million Iraqis, facilitated the mass slaughter in Yemen, and escalated the new cold war with Russia which threatens to kill everything on earth, all just in the last few years.

So forgive me if I indulge in a bitter scoff when Nikki fucking Haley tweets about how heartbroken she is about the recent mass shooting in Florida. 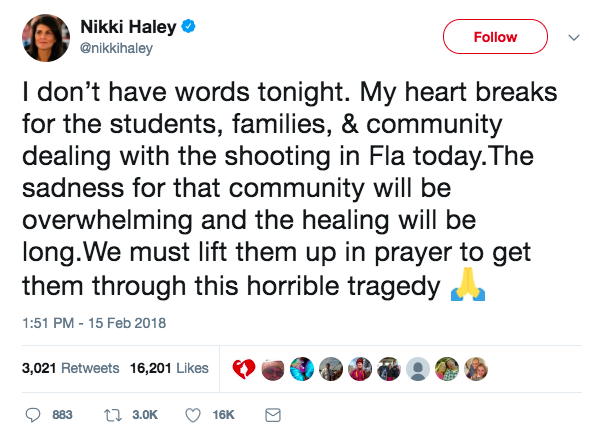 UN Ambassador Haley, who has been described by journalist Michael Tracey as “the most dangerous member of the administration,” pushes relentlessly for dangerous escalations with all targets of the US war machine, seemingly at every opportunity. Virtually any time you see her face she’s trying to rally an international coalition against Syria, Iran, Russia, Venezuela, or North Korea. The push is always toward escalation instead of de-escalation, toward war instead of peace. Nikki Haley is a neocon, and she loves war.

Nikki Haley has pointed her life toward the service of death. Death is her business. Death is her vocation. She is using her position as the leading diplomat for the most powerful government in the history of civilization to sow death, instability, famine and chaos throughout any region which dares oppose US interests.

So when Nikki Haley says that she is shocked and disturbed by the mass murder of civilians, she is lying. She is a death machine awkwardly imitating a human being.

Do you remember the first time you learned what war is? Or have you ever been given the uncomfortable responsibility of explaining it to a small child? Do you remember what that was like? How nonsensical such an idea is to a mind that hasn’t yet been marinated in war propaganda? That’s what sanity looks like. That’s the sort of healthy mentality that recoils from neoconservatism like a hand from a venomous spider.

You might say that I am being callous about a recent American tragedy here, but I am not. I grieve for anyone victimized by violence, no matter where they are. But every day there are civilian victims of US interventionism meeting the same end as those teachers and students in Florida, and neoconservatives like Nikki Haley have devoted their lives to helping that happen. If you feel the deaths in Florida are entitled to some sacred bubble free from anyone pointing out the violent deaths of victims of the US war machine, it’s because you’ve compartmentalized yourself into the same American supremacist reality tunnel that neocons have been promoting. The human beings dying of US-sponsored bombings, terrorism and sanctions every day are not less valuable than you and your countrymen.

It is not normal for human minds to work this way.

In an article titled “Why We’re Underestimating American Collapse”, author and commentator Umair Haque writes of the bizarre social plagues which are ravaging Americans in a way that is not only not occurring anywhere else in the world, but has never happened to any other civilization in recorded history. He writes about the way impoverished elderly people are living in the US today, the mass opiate problem that isn’t impacting any other country in a comparable way, and he writes about the incredible and unprecedented trend of mass shootings.

Is it possible that the need to saturate the citizenry of history’s most powerful military force in endless war propaganda is warping people’s minds? Is it perhaps impossible to blast people in the face day in and day out with domestic psyops telling them it’s normal for their money to be funneled upward to powerful plutocrats while taxes are spent killing strangers overseas without causing mass shooting and opiate epidemics? How far can the American mind be twisted to accept irrational violence and exploitation before it snaps?

I think we are finding out. 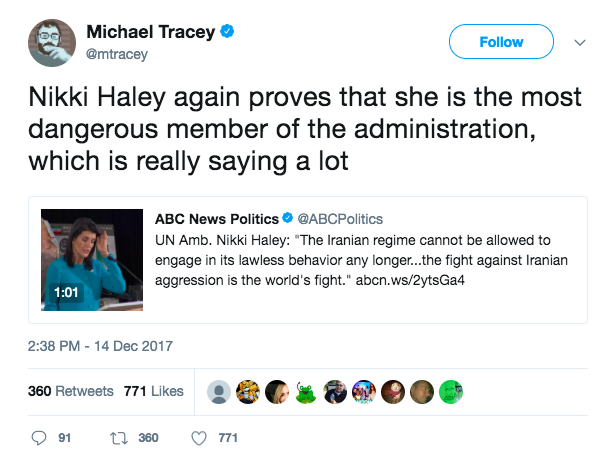 Nikki Haley has arguably been working harder than anyone else to spread this madness throughout the world. The madness which accepts endless mass violence and destruction as an essential baseline, which is more concerned about “apologists” for North Korea, Syria or Russia than about the fact that the US is escalating toward unspeakable horrors with those countries, which needs opiates and antidepressants just to cope with the crushing cognitive dissonance caused by mainlining Orwellian propaganda from all directions, which occasionally manifests in violent rampages in schools.

Society is profoundly sick, and Nikki Haley is the face of our sickness. Stop feigning a will toward life and aversion to violence, Nikki. We see you.

Thanks for reading! My work here is entirely reader-funded so if you enjoyed this piece please consider sharing it around, liking me on Facebook, following me onTwitter, bookmarking my website, checking out my podcast, throwing some money into my hat on Patreon or Paypal, or buying my new book Woke: A Field Guide for Utopia Preppers.

Ex-CIA Director Thinks US Hypocrisy About Election Meddling Is Hilarious

All US government statements about authoritarianism in other nations are invalidated by its treatment of whistleblowers and journalists. #DanielHale #JulianAssange