I know, I know. My readers hate it when I spend energy responding to establishment smears about me; you want my energy and creativity going toward debunking propaganda and pointing to the machinations of the empire. I get it, I really do.

But these smears (and I predicted they were coming in a recent article) are designed to damage my reputation so as to minimize the impact of my work, and I have learned that ignoring them for too long gives the empire loyalists a degree of control over the public narrative about me that they have not earned. Then before you know it blue-checkmarked Twitter accounts are sharing them around as factual information and the number one image for “Caitlin Johnstone” on Google is a picture of me with no makeup in the middle of a gleeful squeal from a video I made for Patreon.

I’ve lost count of the number of smear pieces the Daily Banter (by whom I am blocked on Twitter) has published that are in whole or partially about me. I responded to the first two when they published the blatantly false claim that I have no journalism degree and scared the shit out of me by falsely reporting that I write for Russian propaganda outlets, but I’ve been ignoring them up til now and it’s time to respond to these despicable lying scumbags once again.

The Daily Banter has never denied publishing falsehoods about me; indeed they ended up publishing two unprofessional, juvenile corrections to each of them when pressured. What they have been freaking out about ever since that time is the fact that I threatened to sue them for libel for publishing libelous material about me, because that’s somehow unreasonable and unheard of in their privileged little imperialist circle jerk.

Here’s the Daily Banter‘s big tough suburban gangsta Ben Cohen (who also has me blocked on Twitter) putting me in my place when I demanded a real retraction for the Kremlin propagandist smear:

I had indeed firmly intended to sue the Daily Banter and talked to a couple of American lawyers about it, one of whom I guess contacted them. I was told I had a good case because I could prove intent of malice, which is the big issue in such cases. Then I did some more research and found that this outlet doesn’t appear to get much circulation, functioning more like a blog whose essays can be used as a weapon on social media to beat up anyone who doesn’t fall in line with Clintonite orthodoxy, so I didn’t pursue legal action any further. That’s the whole entire story from my end.

For Martin Shkreli wannabe Ben Cohen, however, it was just getting started. He authored a bizarre, rambling tale about how I’d ended up “crowdsourcing a fake lawyer from a fake law firm” to accomplish some sort of sinister goal he doesn’t make clear. Cohen cites no evidence of this beyond the lawyer who contacted him not having much of an online presence.

I don’t claim to know anything about either of the lawyers I ended up speaking to; I never pursued legal action and never paid anyone. Cohen’s whole story ultimately boils down to “someone contacted me claiming to be a lawyer and it was weird”. But he and his young, dumb and over-funded goon sidekick Jeremy Fassler have been publishing article after article after article squawking about it like it’s a thing, including their latest smear piece. 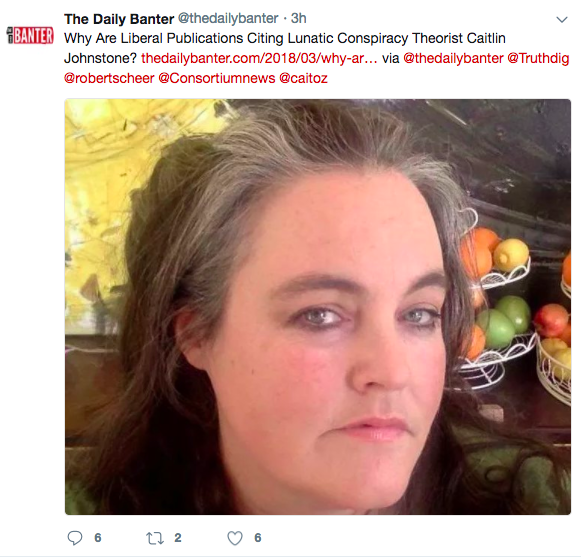 Other than that it’s a pretty standard Caitlin Johnstone smear. Fassler claims I’m trying ally with white nationalists (false), talks about “questioning the Russia narrative” as though it’s an inherently bad thing (false), and falsely asserts that I am mentally ill (because gaslighting is the only weapon they have left) while sneaking in a few jabs at Glenn Greenwald and Truthdig because of course he does.

And that’s pretty much all I have to say about the Daily Banter. Empire loyalists publish smears about me because they can’t get me fired since I’m crowdfunded and can’t get me de-platformed since my only platform is social media and blogging sites, but I’ll always be able to crank out quality material much faster than all of them combined can write smear pieces about me so it’s a losing battle for them. I just mainly wanted to address the lawsuit thing since they’re using it to try and make me look sleazy and unattractive.

It infuriates many factions all across the political spectrum that I keep gaining momentum despite these smears and will inevitably surpass them all, but they’ll never find any real dirt on me since I’m not dirty and they’ll never silence me since my voice is uplifted by the crowd. My work is popular because people like it, my lovely haters. I bet you can find a way to live with that.

Summa Psychonautica: Here We Stand Naked And Dauntless In The Junkyard

We’re Asking One Question In Assange’s Case: Should Journalists Be Punished For Exposing War Crimes?

It's pretty clear that the judge at the Assange extradition trial came in with her mind already made up about how she's going to rule. The prosecution is there to give her an excuse. The burden of proof is on the defense to prove she can't legally do the thing she plans to do.

We’re Asking One Question In Assange’s Case: Should Journalists Be...

Assange’s Persecution Has Exposed Media Depravity The World Over