More Evidence That Twitter Is Unfollowing People From Anti-Establishment Accounts

I’ve been hearing rumblings for a while now that Twitter has been unfollowing people from anti-establishment accounts, and some of my readers have told me they’ve been unfollowed from me, so I’ve been keeping an eye on it but my follower account appeared to be growing normally. That changed about 36 hours ago as of this writing, when I came back from an absurd week-long suspension for calling a group of people “stupid” and “dumb” who had tagged me in a post calling me a Nazi.

Now, this has been going on with Facebook for months already. My Facebook page following, which used to add many people every day, has been frozen on the same number of followers for days now as people are automatically unfollowed as fast as they follow. This phenomenon is common knowledge among dissident voices already; Lee Camp of Redacted Tonight tweeted in January, “In case anyone wants to know how Face book suppression works – I have 330,000 followers there but they’ve stopped showing my posts to many ppl. I used to gain 6,000 followers a week. I now gain 500 and FB unsubscribes ppl w/out their knowledge – so my total numbr never increases.”

This has been happening on Youtube as well, with crucial anti-establishment voices like Jimmy Dore reporting that people are being automatically unfollowed from their channels.

Now it looks like it might be happening with Twitter as well. I’m just going to lay out the evidence I have so that everyone has access to the information and can piece together what’s going on. We already know that Twitter CEO Jack Dorsey will brazenly lie to us about his site’s censorship practices, since he got caught lying about censoring the #DNCLeaks hashtag in 2016, so we’ve got to share information and figure out what’s going on for ourselves. It’s important for us all to put as much information out there as possible.

While Facebook has been throttling my following for ages, my Twitter following has always grown unimpeded ever since I started using it regularly to share my work and ideas. Even when I was suspended for a week I added somewhere between 100 and 200 followers. Ever since I came back, though, my following has been kept steadily between 26,855 and 26,858. I keep getting notifications of new followers, and when I look I see those new followers are indeed there, but for the last 36 hours my numbers haven’t increased with the new followers added, which makes me suspect that people are being unfollowed as new follows come in in order to slow or stop my growth on social media.

This could all be a temporary fluke, but it’s definitely a big change from what was happening, and it’s definitely not just me experiencing this; I tweeted about it asking if others are having the same issue and received a ton of answers in the affirmative. Check out the responses in this thread if you’re curious. 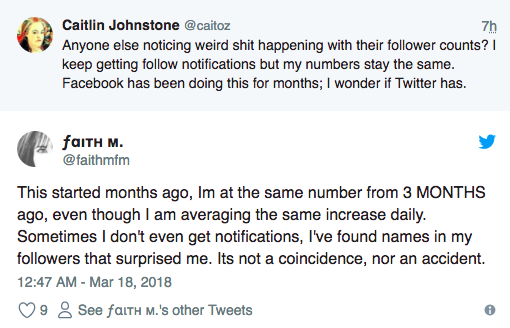 Anyway, here’s what I’ve got. I took a bunch of screen shots, then took screen shots of those screen shots so you can see the time in which I took them. Don’t make fun of my weird sleep patterns.

Hello, new follower in my notifications two minutes later! It always displays the newest followers on the left; when I hover my curser over the account on the farthest left I get this Walton guy here, and when I check the “followers” section on my account he’s on the top left where he should be. This will all be familiar to regular Twitter users; I’m just laying this out for people who don’t know their way around it very well.

But check out what happened when I checked my follower count twenty minutes later:

Why isn’t it going up?

And what happened to my follower count? It went down one. 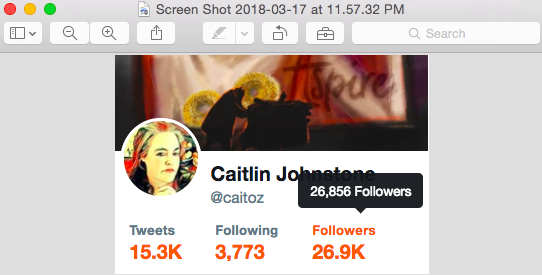 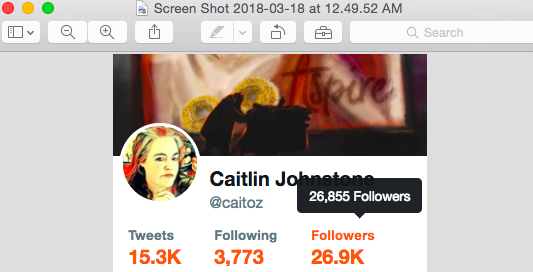 Ooh! Lotsa new friends! When I check my followers list, I can see the last guy who followed on my last count in the bottom-right corner, with eight new followers added since he joined:

But what happened to my follower count? Increased by only three.

Oops, make that one less.

This has never happened to me before. My follower count has always immediately risen in proportion to my new followers. I’ve always gained followers steadily, losing a few here and there, gaining large numbers suddenly when I do something particularly awesome and losing large numbers when I say something particularly controversial. Never before have I gained followers steadily with my numbers being kept around the same point.

Again, readers have told me that they’ve been unfollowed from me in the past against their will:

So that’s really weird. Twitter appears to be doing what Facebook and Youtube have been doing in the wake of increasing demand that they make changes in the way their platforms operate “to prevent the fomenting of discord,” as they were asked to do on the Senate floor a few months ago.

Or maybe they’re not? Who knows? Maybe there’s some other explanation. All I know is that this has never happened to me before, that other people are complaining about the same problem, that Jack Dorsey lies about Twitter’s censorship of anti-establishment material, and that we all benefit from sharing this kind of information with each other. So for any journalists or anyone else out there trying to piece together what’s going on, here’s what’s going on on my end.

I encourage everyone to share the details of their fishy censorship experiences using screen shots with time stamps as I have done here. These bastards won’t tell us how they’re manipulating us, so we’ve got to figure it out ourselves.

All US government statements about authoritarianism in other nations are invalidated by its treatment of whistleblowers and journalists. #DanielHale #JulianAssange