HomeArticleSix Things We Can Learn About US Plutocracy By Looking At Jeff Bezos
Article
author: Caitlin Johnstone
0 likes
15570 seen
11 Comments

I often look at Jeff Bezos when trying to understand how American oligarchy functions for a few reasons.

Firstly, currently occupying the number one slot on Forbes’ billionaires list, he is the top dog. He figured out how to play the plutocracy game quickly, and how to play it better than anyone else.

Second, our civilization is currently headed on a clear trajectory deeper and deeper into Orwellian tech dystopia if we don’t turn things around or drive humanity into extinction first. The new money tech plutocrats own the foundation of that dark future, and we should all keep a very, very close eye on them on general principles as well as to get a read on where things are headed.

Lastly and most importantly, as a new money plutocrat Bezos has had to build his empire with high visibility in the information age. The old money plutocrats built their kingdoms in much darker times, with some families setting the foundations of their rule hundreds of years ago when there was very little in the way of newspaper coverage, and certainly no alternative media scrutinizing power. Bezos’ wheelings and dealings are above ground to a much greater extent, because he’s had to do everything in the public eye.

With that in mind, here are six things we can learn about how US plutocracy operates by looking at Jeff Bezos.

1. The rich rule America because of a system wherein money translates directly into political power.

Amazon has increased its spending on Washington lobbying by 400 percent in the last five years, far in excess of its competition. Bezos hasn’t been doing this to be charitable. With growing antitrust concerns, taxation to avoid, lucrative Pentagon deals to secure, and what some experts are describing as an agenda to control the underlying infrastructure of the economy, he needs Washington on his side.

Plutocrats do not pour large fortunes into lobbying campaigns without reason. They do it because it works.

A 2014 study by Princeton University found that while wealthy Americans have a great deal of sway over US policy and behavior, ordinary Americans have virtually none. This is because corporate lobbying and campaign financing have made the bribery of public officials perfectly legal as plutocrat-championed legislation like 1976’s Buckley v. Valeo, 1978’s First National Bank of Boston v. Bellotti as well as the infamous Citizens United v. FEC has created a system where money translates directly into political power.

2. Because money equals power and power is relative, plutocrats are naturally incentivized to keep the public poor.

Plutocrats necessarily rule such an oligarchic system as surely as kings rule a kingdom. But if everyone is king, then no one is king. If your entire empire is built on a system where money equals power, then you are necessarily incentivized to keep money out of the hands of the public while amassing as much as possible for yourself.

The larger the Amazon empire grows, the more of its competition dies and the lower wages get. At the hottest point in the 2016 Democratic party primary, Bezos’ Washington Post ran sixteen smear pieces in sixteen hours against Senator Bernie Sanders, who is largely responsible for bringing the word “oligarchy” into mainstream consciousness.

Sanders famously ran a campaign powered by small donations averaging 27 dollars. The less money people have, the less of those kinds of donations they can afford to make, and the less political influence the masses can wield. With a majority of Americans already unable to afford even a thousand dollar emergency, it doesn’t take much more squeeze to kill all hope of another populist insurgency of that sort.

Power is relative and money is power, so the poorer you are, the more powerful the plutocrats become.

3. Controlling the media is very important to plutocrats.

Jeff Bezos, the most crafty plutocrat alive, did not purchase the Washington Post in 2013 because he expected newspapers to make a lucrative resurgence. He purchased it so that he could ensure exactly what WaPo did to Bernie Sanders in 2016. The neoliberal Orwellian establishment that Bezos is building his empire upon requires a propaganda mouthpiece, so Bezos purchased a long-trusted US newspaper to accomplish that. WaPo is now easily the most virulently pro-establishment among all large mainstream publications, not just defending establishment narratives but actively attacking anyone who challenges them.

The current system which only serves the wealthy and the powerful cannot exist without nonstop advertising convincing the American public that the status quo is in their best interest. Plutocrat-owned corporate media is used to manufacture consent for that system; for the economic system, for the wars which prop it up, for the politicians which the plutocrats own and operate, for the political system which they have infiltrated every level of. The ability to manipulate the way the public thinks is an essential part of plutocratic rule.

Jeff Bezos is a contractor with the CIA and sits on a Pentagon advisory board. He is doing everything he can to cozy up and ingratiate himself to the establishment on which his empire is built, up to and including kicking WikiLeaks off Amazon servers in 2010. This dances very creepily with Amazon’s involvement in surveillance systems and digital “assistance” devices like Alexa.

If you want to be a millionaire in the current system, you can probably do so with luck, privilege, talent and hard work. If you want to be a billionaire, you’ve got to learn how to collaborate with existing power structures. Due to the extreme opacity of those power structures in America hidden behind the veil of government secrecy, it is hard to know exactly what forms those alliances take, but they clearly do happen as a glance at Bezos’ career shows.

5. The people willing to do anything it takes to get to the top are the ones who get there.

Normal human beings would have a difficult time knowing businesses are dying and workers are getting poorer as their empire grows. Jeff Bezos just keeps growing. He will happily collaborate with depraved intelligence agencies, manipulate and propagandize Americans, and expand the gulf between the rich and the poor just to be king of the world.

This is the sort of person who rises to the top in unregulated capitalist systems. Money rewards people who have shut down (or are born without) that part of themselves which empathizes and is made uncomfortable by exploiting and harming others. In a system where money rewards sociopathy and money equals power, that means we necessarily wind up in a system that is ruled by sociopaths. Those plutocrats form alliances with each other and with defense and intelligence agencies to ensure the continuation and expansion of their empires, and that alliance is currently king of America.

6. It will never be enough for them. 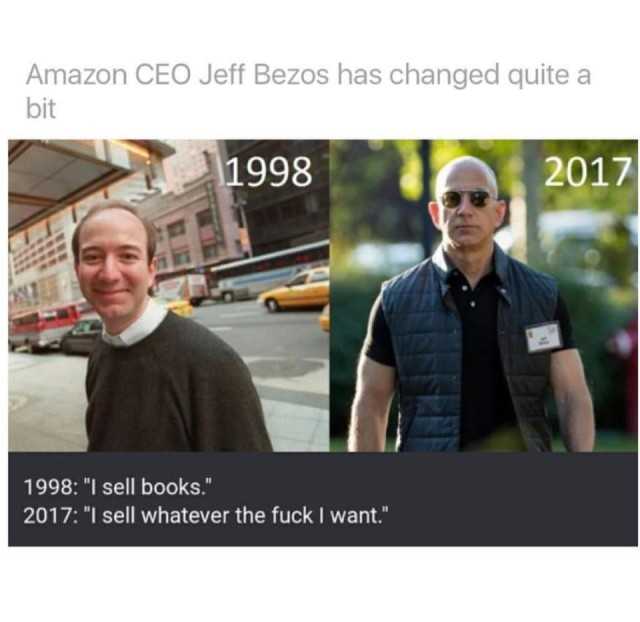 Jeff Bezos is worth 131.5 billion dollars as of this writing, and he is getting more ambitious, not less. He doesn’t need that money to buy more stuff; it isn’t about money for him. It’s about power. The impulse to rise to the top of your monkey tribe is an impulse buried deep within our evolutionary heritage, and when that impulse isn’t checked by empathy for your fellow man it creates an unquenchable drive to grow and grow in invincible power no matter what kind of suffering that creates.

This explains why the world is the way it is today, with billionaires making so much money last year alone that they could end extreme poverty for our entire planet seven times over, but don’t. With Americans dying of underinsurance and exposure on the streets while billions of dollars are poured into bombing poor people overseas. With tensions escalating between two nuclear superpowers over some petty geopolitical agendas. With the Arctic warming at an astonishing rate while rainforests and biodiversity vanish perhaps forever.

We need to change the system which enables these depraved individuals to rise to the top and rule over us. Governments should serve people, not omnicidal, ecocidal sociopathic oligarchs. We must take our world back from these monsters.

More Evidence That Twitter Is Unfollowing People From Anti-Establishment Accounts

@caitoz Thomas Theiner back in 2014 mocking the victims of the Odessa massacre.

And here is his "plan" to bomb Belgorod, Russia: https://euromaidanpress.com/2014/04/13/plan-b-flatten-belgorod/

In case anyone's curious whom we're dealing with.

This person has me blocked but for the record nobody who thinks this has actually studied the cold war. JFK wasn't on the phone yelling "Try and die," he was ordering Jupiter missiles removed from Turkey.

Sorry to harp on this, but I can't get over how all the top nuclear experts have announced we're in something like red-alert Cuban Missile Crisis territory -- yet nobody seems troubled enough to do anything about it, except double-down on the policy that brought us to this point

Detente used to be a household word. Mainstream political parties campaigned on it. Now hardly anyone knows it's even a thing, let alone a real option in dealing with the horrifying escalations between NATO and Russia. This is because the political/media class never tells them.

This great article from Ted reminded me that Turkey said back in April that other NATO members wanted the war in Ukraine to continue to "weaken" Russia. A few days later, Lloyd Austin admitted weakening Russia was the goal.
https://english.alaraby.co.uk/news/nato-allies-want-longer-ukraine-war-weaken-moscow-turkey https://twitter.com/Antiwarcom/status/1577343885751201793

If Everyone Is King Then No One Is

All Our Systems Are Built To Elevate Viciousness