Editor’s note: In order to circumvent internet censorship, today’s Caitlin Johnstone essay has been replaced with an op-ed by Snooty McCentrist of the National News Conglomerate. NNC: Obey.

After Bernie Sanders failed to impress in his underwhelming consecutive victories in Iowa and New Hampshire, it’s time for his far-far-left extremist base to grow up and face reality: there’s no way he can beat Trump. Especially with people like me churning out all these op-eds every day to make sure that he can’t.

Face it, Democrats: Sanders is no frontrunner. As the always rational adult in the room Chris Matthews recently pointed out, if you compare his New Hampshire votes to the combined vote total of moderate candidates Pete Buttigieg, Joe Biden and Amy Klobuchar, he’s actually trailing far behind. Sanders clocked in at a paltry 26 percent of total votes, while the triune electoral threegernaut Klobdenbutt amassed a whopping 53 percent. Now, you don’t have to be Andrew Yang to figure out that 53 is more than 26.

That’s not my opinion. That’s math.

Wow this is bad news for Bernie Sanders when he runs against three people at once in the general. pic.twitter.com/t5mxnMPLwu

If you can’t take it from me, take it from the cold, hard numbers: if Democrats want to beat Trump, they need to nominate a centrist. Someone who rejects the extremes of Bernie’s far left and Trump’s far right and instead espouses sensible, middle-of-the-road values like endless war and military expansionism, rapacious ecocide, corrupt plutocracy, crushing domestic austerity measures, new cold war nuclear escalations, continued deregulation of sociopathic financial and commercial institutions, police militarization, unprecedented levels of imprisonment, Orwellian surveillance programs, internet censorship, and ever-mounting authoritarianism.

You know, the moderate position.

Because think about it, Bernie Bros: if you resist the DNC’s attempt to elevate a sensible candidate like Mike Bloomberg to your party’s nomination just because you don’t want a racist Republican billionaire oligarch authoritarian with dozens of allegations of sexual misconduct against women to be your president, then you’re stuck with Donald Trump.

Chew on that prospect for a minute.

Given that the progressive wing managed to get about 35% while the moderates totaled more than 52 percent, it is clear that the majority of the party is not eager to enter a political suicide pact with a self-described socialist promising a revolution. https://t.co/mFwi4If36G

You need to be more realistic, Bernie bros. How can Bernie possibly win when we’re doing everything we can to prevent him from winning? We’re telling you he’s not electable, and no one would know better than us: we’re the ones making sure he stays that way.

Seriously, stop being such insolent little shits. I’m here presenting very forceful arguments using a confident and assertive tone in a high-profile news outlet, and you’re meant to obey. This is an op-ed. I have a professional headshot photo next to my name. That means you think what I tell you to think.

What exactly do you unwashed riff raff think democracy even is, anyway? Some kind of ponies-and-unicorns fantasy land where people get to just have the candidate they want to have, just because that’s what most of them want? That kind of pie-in-the-sky dreaming is for people who don’t have the entire billionaire media engine pointed at sabotaging them at every turn.

But if you give us a Mike Bloomberg, for example, we’ll just let him sail right on through. Hell, if we can get two right-wing billionaires staging a made-for-TV kayfabe spat over the presidency from July to November we’ll never stop amping that shit. Holy God, imagine the ratings! 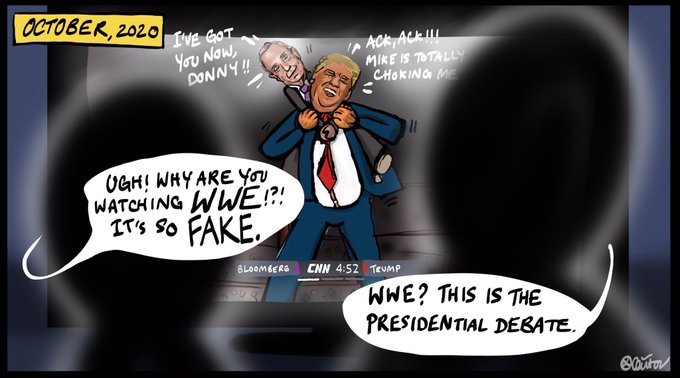 Stop living in a childish fantasy world where the environment is real and war is something you need to think about and people shouldn’t die if they don’t have the correct imaginary numbers in their bank account. Let the realists whose entire worldview is built around made-up narratives and a make-believe economy tell you what to do.

Do as we say. Just do it. Just bend over and let us install a nice moderate psychopath, and this will be over before you know it. Relax, take a deep breath, and think nice, pleasant thoughts until November. Dream one of those wacky dreams you airy fairy hippies are always having, like having a real healthcare system or something.

Anyway, I’m going to send this off to my editor. The next fifty op-eds I write will be garment-rending outrage over the comments this one receives on Twitter.

World Screams In Anguish At News That Olympics Won’t Be...

US Officials Can Guard Against Havana Syndrome With This Innovative...

9/11 Was Bad, But It Wasn’t QAnoners Wandering Around The...