HomeArticleNone Of The World’s Worst People Are In Prison: Notes From The Edge Of The Narrative Matrix
Article
author: Caitlin Johnstone
3 likes
10342 seen
74 Comments

None Of The World’s Worst People Are In Prison: Notes From The Edge Of The Narrative Matrix

Exactly zero of the world’s worst people are in prison.

The main obstacle to humanity forming a collaborative relationship with each other and our ecosystem isn’t because of “human nature”, it’s because manipulative psychopaths keep working their way into power. Finding a way to deal with psychopathy would solve most of our problems.

The way politicians pretend to despise their opponents’ depraved actions and then get all cuddly later proves they’re not each other’s enemy, they’re yours.

Biden will probably be the next US president unless something drastic happens (which of course is always possible), and anti-imperialists are at least somewhat aware that this will likely mean an increase in military interventionism and cold war escalations. We should all start getting real and preparing for that.

I guarantee that anyone who’s made a thorough study of opposing US imperialism suspects it will get worse, maybe a lot worse, under Biden and his ventriloquist team. But they’re afraid to say so because being perceived as supporting the Trump disaster can hurt your reputation.

Always side against US imperialism. You’ll always be right, you’ll always look cool, you’ll win every argument, and history will always vindicate you.

People who accept cold war escalations against China and/or Russia simply haven’t thought hard enough about what nuclear war is, what it would mean, and the way it would be likely to happen.

“Of course I know the US lies about everything and circulates propaganda constantly, I’m not a fool,” said the Smart Internet Person. “But also for some strange reason it’s become very very important to me over the last year that we all hate China.” 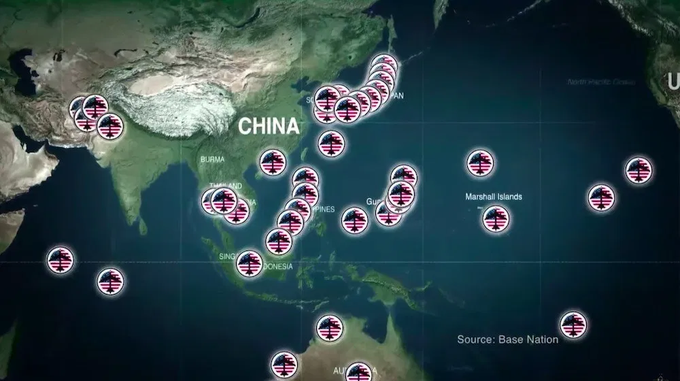 These are US military bases. One of the two countries in question is behaving aggressively, the other is behaving defensively. If you can’t figure out which is which, it’s because your media echo chamber has turned your brain into soup.

“I don’t trust China” is like half the comments I get on social media these days.

Nobody’s asking you to “trust” China. You don’t have to “trust” anyone to advocate for detente over world-threatening cold war escalations. This really isn’t complicated.

Pundits are like “Beijing is just trying to control Xinjiang because its location will play a crucial role in Belt and Road!”

Uhh yeah, duh. And the western empire is fighting to remove that region from Chinese control for literally the exact same reason. How is this not obvious?

Mentally replace every news headline about every US-targeted government with “Nation Insists On Its Own Financial, Economic, Resource and/or Military Sovereignty”. You’ll get a much more accurate picture of what’s going on.

Notice how most of the mainstream buzz about psychedelics today is about their usefulness in a turning psychologically troubled people into functional cogs in the machine, not in letting everyone use them so we can all see the insanity of the machine itself.

When imperialists yell the word “whataboutism” what they really mean is “Stop pointing out the damning contradictions, inconsistencies and hypocrisy of my position.”

There’d be a lot less confusion online if people really intuitively understood that there is no correlation between how confidently someone says something and how true it is.

Thanks for reading! The best way to get around the internet censors and make sure you see the stuff I publish is to subscribe to the mailing list for my website, which will get you an email notification for everything I publish. My work is entirely reader-supported, so if you enjoyed this piece please consider sharing it around, liking me on Facebook, following my antics on Twitter, throwing some money into my tip jar on Patreon or Paypal, purchasing some of my sweet merchandise, buying my books Rogue Nation: Psychonautical Adventures With Caitlin Johnstone and Woke: A Field Guide for Utopia Preppers. For more info on who I am, where I stand, and what I’m trying to do with this platform, click here. Everyone, racist platforms excluded, has my permission to republish, use or translate any part of this work (or anything else I’ve written) in any way they like free of charge.

US Intelligence: If Trump Wins Russia Did It, If Biden Wins It Was China And Iran

What ‘Democracy’ Is Under Attack? Notes From The Edge Of The Narrative Matrix

Still some ❤ 4 #Bernie, but he was the compromise.@Jase_Paisley·
4h

“When you realize that corporations are America’s real government, the whole ‘it isn’t censorship if it’s a private company doing it’ argument is seen for the joke that it is” https://link.medium.com/JNoa6eoz8cb

The US government tortures whistleblowers and journalists.

"Back before he was silenced Assange tweeted 'The overwhelming majority of information is classified to protect political security, not national security.'

I think of this quote often."

What ‘Democracy’ Is Under Attack? Notes From The Edge Of...

It’s Spelled ‘Dead Asshole’, Not ‘Philanthropist’: Notes From The Edge...

Patriot Act 2, Censorship, And Other Notes From The Edge...

The Boot Is Coming Down Hard And Fast

Stop Trivializing The Term ‘Coup’: Notes From The Edge Of...