US: Russia Hacked The Evidence Of Chemical Attack In Syria

We are now being told (and I assure you I am not making this up) that if the Organization for the Prohibition of Chemical Weapons doesn’t find evidence that the Syrian government conducted a chemical weapons attack in Douma last week, it’s because Russia hid the evidence.

“It is our understanding the Russians may have visited the attack site,” reports U.S. Ambassador Kenneth Ward. “It is our concern that they may have tampered with it with the intent of thwarting the efforts of the OPCW Fact-Finding Mission to conduct an effective investigation.”

I guess the idea is that this international top-level investigative team on which tremendous credibility has been placed by the western world can be thwarted by Russians showing up with a Hoover and spraying some Febreze in the air like a teenage stoner when mom comes home? I’m not sure, but given the immense dearth of evidence we’ve been seeing in support of the establishment Douma narrative and the mounting pile of evidence contradicting it, it sure does sound fishy.

Robert Fisk Reports Head of Douma Clinic Denies Chemical Weapons Attack – Robert Fisk is one of the very few excellent investigative journalists still employed in the UK. He is twice winner of the British Press Awards' Journalist of the Year prize, and https://t.co/bh10198hWv

Now that the jihadist-occupied suburb of Douma has been retaken by the Syrian government, western journalists have been allowed in to poke around and start asking questions, and so far it isn’t looking great for the propaganda machine.

The Independent‘s Robert Fisk has published a report which affirms the story so many westerners have been dismissing as Kremlin propaganda for days now after interviewing a doctor from the hospital of the area where the Douma attack was supposed to have occurred. Dr Assim Rahaibani told Fisk that what was in actuality an outbreak of respiratory distress among occupants of a dusty oxygen-deprived tunnel was made to look like the aftereffects of a chemical weapons attack when a member of the White Helmets started shouting about a gas attack in front of a bunch of video cameras. Everyone panicked and started hosing themselves down, but in the video, according to Rahaibani, “what you see are people suffering from hypoxia – not gas poisoning.”

This report was independently backed up by a reporter from One America News Network named Pearson Sharp, who gave a detailed account of his interviews with officials, doctors, as well as many civilians on the street Sharp says he deliberately selected at random in order to avoid accusations of bias. Many people hadn’t even heard that a chemical weapons attack had taken place, and the ones who had said it was staged by Jaysh al-Islam. The staff at the hospital, including a medic-in-training who was an eyewitness to the incident, gave the same story as the account in Fisk’s report.

The increasing confidence with which these unapproved narratives are being voiced and the increasing discomfort being exhibited by empire loyalists like Ambassador Ward indicate a weakening narrative in the greater propaganda campaign against the Assad government and its allies, but don’t hold your breath for the part where Fox News and the BBC turn around and start asking critical questions of the governments that they are meant to be holding to account.

The journalists who have been advancing the establishment narrative on Syria aren’t about to start reporting that they’ve gotten the entire Syria story assballs backward and have been promoting a version of events manufactured for the benefit of CIA-MI6-Mossad agendas.  You’re not about to see CNN, who last year staged a fake scripted interview with a seven year-old Syrian girl to manufacture support for escalations against Assad, suddenly turn around and start asking if we’re being told the full story about what’s happening Syria.

Watch them closely. Watch how they steadfastly ignore the growing mountain of evidence and keep promoting the Syrian regime change agenda that the western empire has been working toward for decades. Watch them dismiss all evidence they can’t ignore as Kremlin propaganda and shift the narrative whenever things start to look bad for them. Those riding the crest of the wave of establishment media are too far gone into the blob to ever admit error and change. The least among us aren’t about to stop constructing a public reality tunnel which depicts them as heroes of truth, tear it all down, and start advancing a narrative which makes them look like fools at best and villains at worst. It will not happen.

Luckily for us, it doesn’t need to. Internet censorship is still far from closing the door on our ability to network and share information, and we’ve been very effective at sowing skepticism among the masses. The war propagandists are not nearly as good at their jobs as they want to believe, and we can beat them. 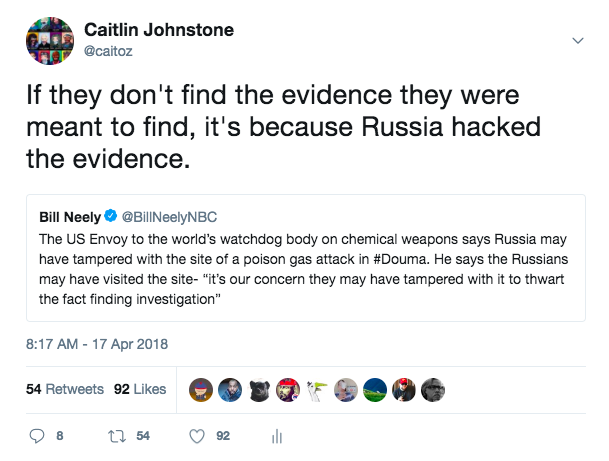 They work so hard to manufacture support for war because they require that consent. If the oligarchs try to launch a war against a disobedient nation amidst very clear opposition from the public, they will shatter the illusion of freedom and democracy that their entire empire is built upon, and then they’re exposed. Corporatist oligarchy has succeeded in weaving its web of dominance because its oppression has thus far remained hidden and its depravity disguised as humanitarianism. They cannot expose themselves by transgressing a loud NO from the public or else the masses will realize that everything they used to believe about their country, their government and their world is a lie.

They won’t risk that. We can force them into retreating from open war by circulating facts and information and keeping a healthy level of skepticism circulating among the public. Watch them squirm, move goalposts and shift narratives, and point and yell about it whenever it happens. We can win the media war against the propagandists. We have truth on our side.

Always have been; that's why we're a US military/intelligence asset and why we're letting them imprison Assange. The tough guy crime colony image is just something we play up out of cultural pride. We're a very obedient and malleable people.

@caitoz What the Hell is happening in #Australia ?

Why are they so passive?

Mandatory vaccines would be a violation of bodily sovereignty and vaccine passports are authoritarian abuses and people should be allowed to discuss this stuff on the social media platforms everyone uses and the army shouldn't be policing the streets of fucking Sydney.

My followers probably know I don't get along with these accounts but I still find it abhorrent for government-tied monopolistic tech companies to dictate what people are allowed to say about virus policies which affect everyone. @jack @TwitterSupport let people speak.

Millions of highly traumatized men came home from the World Wars & started families and poured all their trauma into the minds of their children
That trauma has been passed down through subsequent generations
That's the real lasting legacy of wars
@caitoz https://caitlinjohnstone.substack.com/p/theres-never-been-a-better-time-to

In case you missed it the US prosecution against Julian Assange relied heavily on false testimony from a diagnosed sociopath and convicted child molester.

ICYMI (easy to do - the world's corporate press opted for a Code of Omertà, the silence was deafening): The US indictment submitted to a UK court for Julian #Assange's extradition was "a dirty-tricks operation that contains lies" its star witness retracted https://www.wsws.org/en/articles/2021/07/03/stun-j03.html