When Twitter first implemented its “hide replies” function last year I published an article warning that it could be used by establishment narrative managers to marginalize dissident voices and diminish the relatively egalitarian nature of the platform. When I wrote it I was imagining the function being used by overt manipulators like cable TV pundits and Washington Post columnists, and think tank operatives like Neera Tanden who vocally supported the implementation of the function.

What I absolutely was not expecting, as paranoid and conspiracy-minded as I am, was a highly regarded UN-associated international chemical watchdog group using the function for that purpose.

As of this writing, if you go to the Twitter account for the Organisation for the Prohibition of Chemical Weapons (OPCW), you’ll see this tweet at the second from the top:

That “#wikileaksdoumareport” hashtag in the hidden tweet refers to the leaks which have been pouring out from the OPCW adding to the mountain of evidence that the US, UK and France bombed the Syrian government in 2018 as a retaliation for a chemical weapons attack in the town Douma which did not occur. Whoever is in charge of the OPCW’s Twitter account does not like the lowly commoners talking about this on their page.

Here’s an OPCW tweet from a week ago which has the same issue:

Click the same little button to view hidden replies and you’ll see three of them on this one, again all discussing the scandal-ridden Douma investigation:

It doesn’t seem to happen if you’re not logged on to your account, and seems to express differently on different browsers, but if you log in and scroll through the OPCW Twitter page you’ll find many tweets with hidden replies, almost all of which directly pertain to the Douma scandal.

The OPCW tweet which appears to have the largest number of replies is the smear job they released earlier this month attacking the whistleblowers whose leaks poked giant holes in the official Douma narrative. This smear job has been ripped to shreds in an article by Grayzone‘s Aaron Maté, who in his trademark style systematically debunks the organisation’s attempts to spin the whistleblowers as incompetent outsiders who tried to manipulate the Douma investigation for no clear reason.

If you go to that OPCW tweet and scroll down you’ll see dozens of spaces where replies ought to be, with the message “This reply was hidden by the original Tweet author,” meaning hidden by the author of the initial top tweet by the OPCW. I’ve archived screenshots of the entire thread here as it looks from my account as of this writing, but here’s a small sample of what the top of the replies section looks like on that tweet: 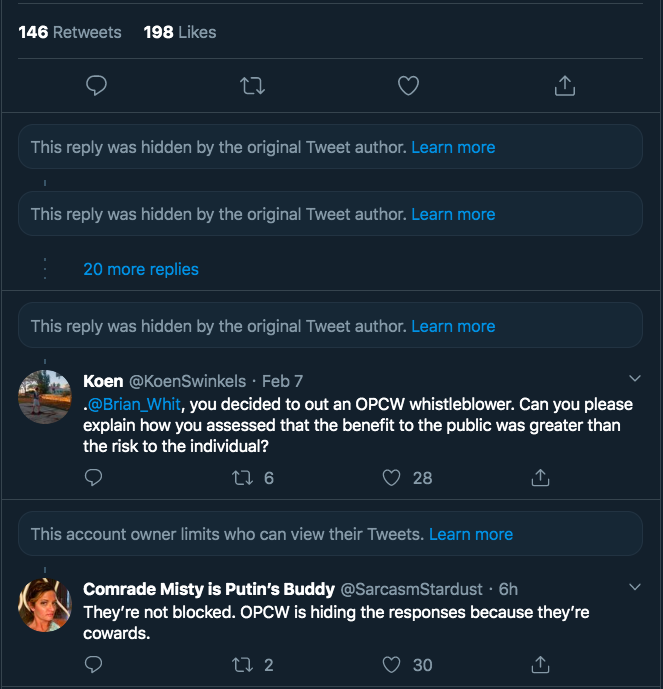 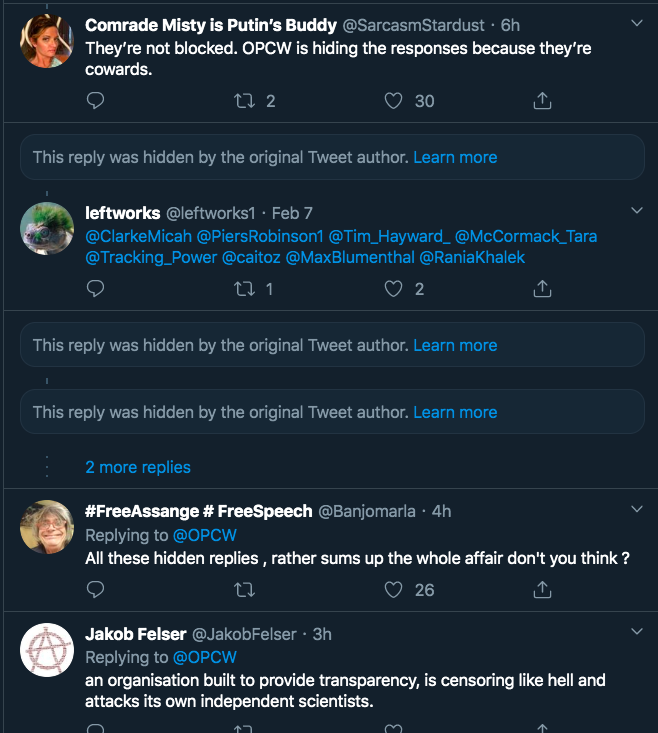 I myself posted the reply that got the most likes and retweets back when the OPCW first shared its smear job, but in a strange twist on Twitter’s “hide replies” function it doesn’t show up in the main thread or in its “hidden replies” section. Other users also say they can’t see it in either section. So as things are right now it looks like some posts in threads with a large number of hidden replies are just disappeared entirely, which is all the more incentive for narrative managers to use it.

There are already many users in the comments objecting to the OPCW yet again making use of opacity to silence dissident voices, and understandably so. Ever since the first Douma leak in May 2018 this organisation has been stonewalling journalists, refusing to answer crucial questions, smearing its own investigators and denying them a platform to speak, all after hiding from the public the fact that there had been large amounts of internal dissent regarding its Douma investigation. This dissent included unanimous agreement between four toxicologists that no chlorine attack occurred in Douma, and reports that some 20 OPCW inspectors had voiced objections to the way the Douma investigation was taking place.

Readers need to click on “hidden replies” to see how this is going down with an informed public. https://t.co/RuzlLd0VvS

These deliberate acts of obfuscation make no sense if you look at the OPCW as an independent international investigative body whose sole interest is truth and the elimination of chemical weapons, but they make perfect sense if you see it as a narrative management apparatus of the US-centralized empire. The US government already has an established history of manipulating the OPCW into facilitating the advancement of pre-existing regime change agendas in the Middle East, and not one but two whistleblowers have separately attested that US government officials were brought in by OPCW leadership (in violation of the organisation’s supposed independence) to persuade them that the Syrian government had committed a chemical weapons attack.

The Organisation for the Prohibition of Chemical Weapons is acting like a narrative management operation because that is what it has become: a tool to help the US-centralized empire spin narratives favorable to pre-existing regime change agendas like the one it has long had for the Syrian government. That’s how it behaves, so we should ignore all narrative spin and assume that that’s what it is until its behavior changes. As long as it continues walking like a duck and quacking like a duck, we should continue to assume that it’s a duck.

The OPCW has been hiding replies on Twitter, yes. But at least it has stopped hiding what it is.

"I'm picturing a story set in a world where everyone's a slave but doesn't know it. People think thoughts they believe they came up with themselves, make decisions and lifestyle choices that they think are their own,"
https://caitlinjohnstone.substack.com/p/ideas-for-a-dystopian-novel

my one message to the world: propaganda very rarely works, people are not that stupid. and if it works it's usually a function of material reasons.

"My dystopian society is built on endless violence, oppression and exploitation, but because in this world the science of mass-scale psychological manipulation is so advanced, people don't even know that it's happening."
https://www.youtube.com/watch?v=ippJOx5EdNY

"My dystopian society is built on endless violence, oppression and exploitation, but because in this world the science of mass-scale psychological manipulation is so advanced, people don't even know that it's happening."
https://www.youtube.com/watch?v=ippJOx5EdNY

"I'm picturing a story set in a world where everyone's a slave but doesn't know it. People think thoughts they believe they came up with themselves, make decisions and lifestyle choices that they think are their own,"
https://caitlinjohnstone.substack.com/p/ideas-for-a-dystopian-novel

Silicon Valley Should Not Restrict Public Discourse About Covid Measures...

US Coverup Of Syria Massacre Shows The Danger Of The...